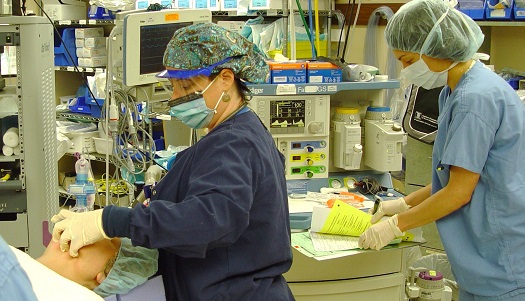 The US Department of Veterans Affairs (VA) is expanding the roles of most advanced-practice nurses in VA facilities—but not that of certified registered nurse anesthetists or CRNAs. (In photo, a CRNA administers anesthesia to a surgical patient at St. Francis Hospital in Wilmington, Delaware.)
The change in scope of practice is intended to let advanced practice nurses work with less supervision by physicians and is intended to ease long waits for care at some VA facilities. At the American Association of Nurse Anesthetists, President Cheryl Nimmo, CRNA, DNP, MSHSA, believes the VA has made a mistake by not including CRNAs in the change. 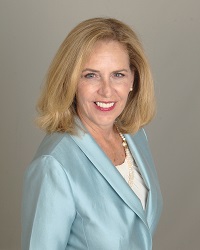 What is at issue here—why does the VA not want to extend your scope of practice?

The VA is saying there is no access-to-care issue, but their own documents show long waiting times for procedures that require anesthesia. Our position is that three out of four advanced practice nurse positions are included [in nurses getting expanded scope of practice] and there is no reason for leaving us out.

You believe that there is an access problem with procedures that require anesthesia within VA facilities?

Yes, the VA’s own documents show long waiting times for cardiac and endoscopic procedures and VA patients are being sent out to civilian facilities to have them.

Is the VA’s position likely to change with a new administration in Washington?

A lot of people are asking me that, but I’m not a seer. Also, we are a non-partisan group.

Is this a turf battle?

I don’t see it as a turf battle. We are intent on being patient-centered.

What about arguments that having physicians supervise CRNAs is safer?

The Department of Defense doesn’t have this issue. CRNAs are the only providers in DOD medical hospitals. The military has no issue with that. There have been a number of studies showing CRNA care is just as safe.

What is your personal experience in the field?

I practiced clinically for 37 years before becoming a fulltime educator. I did 12 years in the Army Reserves, I’ve had a solo practice and I’ve worked in a trauma center.

Based on that experience, if you had a loved one who needed care would you be comfortable with a CRNA giving that care?

I would request a CRNA. I know the level of care and attention given. Nurses are nurses first, they focus on caring, on the degree of care they give. Physicians and nurses both bring high-quality care [technically] but nurses are patient-focused first.

What happens next in your efforts to get the policy changed?

We are still seeking comment. The VA extended the comment period but it ends January 13 and the change is due to take effect then.