Charles Mattocks Wants to Burn the Fat on US Healthcare 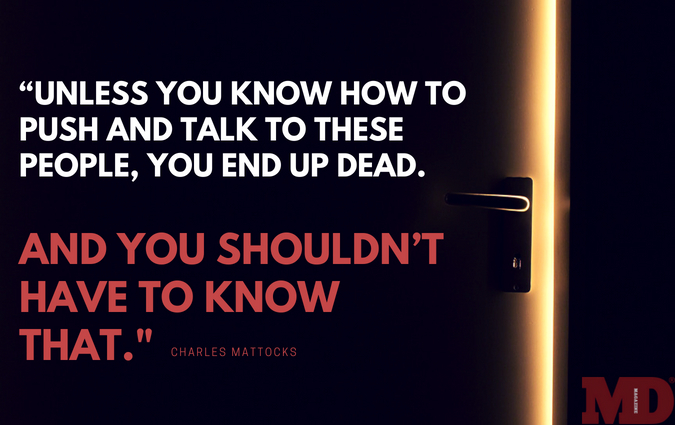 Charles Mattocks has been surrounded by big names his entire life. The nephew of Bob Marley, Mattocks has collaborated in the studio with LL Cool, and has acted opposite James Woods. He’s given Dr. Oz healthy dinner tips, and he’s swung by the CNN and ABC news desks to discuss diabetes.

A Renaissance man whose fame has come from his pursuits into acting, producing, cooking, writing, directing, and researching, Mattocks understands the value of a big name attached to a big idea.

But as a patient with type 2 diabetes (T2D), Mattocks has learned that it’s the little names in healthcare that bring the most change. He recalled to MD Magazine® a time he sought out a high-profile urologist for an appointment. The prolific doctor couldn’t afford to spend more than just minutes at a time in the room with Mattocks, and only recommended costly, invasive procedures and evaluations when he did.

Mattocks sought a second opinion from a lesser-known specialist. By the meeting’s end, the 2 had become friendly, conversational, and Mattocks had learned he wouldn’t actually need any of the procedures the first doctor had recommended. He also took away a valuable lesson on the who the real heroes of healthcare are.

Now Mattocks is in the business, too.

Before Mattocks mentions his work as an executive producer and director of multiple documentaries, or even his published work on diabetes-friendly diets, he emphasizes his role as an advocate. Really, advocacy connects all of his roles.

“I’m really just an advocate of health, and I’m trying to play my part out here,” Mattocks said. Personal stakes are what first drove him there.

His celebrity as the “Poor Chef” came from a time in his life when he was trying to provide for his son, and centered around the food he was exposed to in his Caribbean upbringing. After receiving his T2D diagnosis, he became more prominent in public health issues; he was eventually named a Blue Circle Champion for the International Diabetes Association for his work in the field, and had some of his work published with the American Diabetes Association (ADA).

It wasn’t until his mother was diagnosed with complex regional pain syndrome (CRPS), an uncommon chronic pain condition which develops after a procedure or cardiovascular event, that his worlds of media and healthcare advocacy fully meshed. His 2016 award-winning documentary “Trial by Fire” follows his mother and other patients with CRPS as they combat a condition for which there are limited therapies and a variety of regulatory hurdles.

His mother’s navigation through this difficult avenue of healthcare—by which there are more problems than solutions—opened Mattocks’ eyes to how even the best-intentioned care providers can be nullified. He recalled an instance where his mother, rather than dismissing an apathetic doctor she was referred to, wrote him a heartfelt letter about improving the way he cares for his patients. Surprisingly, the doctor responded; he agreed that he could be better.

“I think when they got into this profession, they may have started off with good intentions, but because of the system, it probably has made them different people,” Mattocks said. “It goes across the board, and I don’t know how you change that system, because it does seem like an entire system that’s flawed.”

Perhaps Mattocks’ most prominent work as of late has been as creator, producer, and host of “Reversed,” a reality television show on Discovery Life Channel that follows 5 patients with diabetes as they try to better their disease control through treatment, diet, and lifestyle changes.

The show, which aired its first season last year, was not just the first to focus on diabetes on national television. It led to real-world results in the patients which they had not previously believed to be possible. Some lost 60 or more pounds. Others reduced their rate of medication—or even insulin, to a complete stop. Most of the patients, Mattocks said, gained a perspective that life was “something worth living.”

Inducing individual miracles with just the help of a handful of healthcare experts made him wonder: why aren’t these results more common across the country? “If we can do that with almost next to nothing, and the healthcare system that’s spending billions of dollars can’t do it, we know the issue lies in the money,” Mattocks said.

To his perspective, there are far too many comfortable jobs—in terms of salary, benefits, and limited performance expectancies—occupied in US healthcare. The end-result is an over-layered, top-heavy worker system which gives no merit to actual workload in a federal system that spends nearly twice as much as the next-costliest system.

And all this goes to an unreliable product. Mattocks imagined if he were suffering from chest pains and sought out a cardiologist, it would take him at least a week to have a visit scheduled. Even then, it might not be enough.

“Unless you know how to push and talk to these people, you end up dead,” Mattocks said. “And you shouldn’t have to know that.”

That’s where a bus would come in.

Inspired by the OneBlood Donor Center Big Red Bus blood donor tour, Mattocks is currently crafting plans for a nationwide bus tour that would provide free diabetes and hypertension screenings at community-based stops. Its services would be two-fold; at-risk patients can receive free diagnosis, then be connected with healthcare providers for any necessary follow-up.

Mattocks believes testing 50,000 people in the first year is feasible. After having designed a similar screening bus for diabetes with pharmaceutical companies Shire and Edelman about 3 years ago, he finds the biggest hurdle in the project is in getting backing for it.

“What I’m doing here with the bus, I’m almost begging,” Mattocks said. “But you know what? That’s okay. We’re fighting to get the money right now, and as soon as we do, we’ll get the bus and get on the road. The excitement is here, but as far as getting people to cut a check, that’s always the hard part.”

A Straight Route to Care

There will be no grand opening for the bus tour. There will be no red carpet, no formal launch date, no LL Cool J, Dr. Oz, James Woods, nor CNN. This is Mattocks’ passion project, and as such, it is inching its way towards fruition by his own will. He understands the dissonance between him and potential investors—“I’m doing it from the heart, and they want to see it transfer to dollars”—and knows that difference can’t change as long as he provides the type of service he wants to provide. The only return on investment is in the long-term health of at-need communities.

Mattocks attends the annual ADA medical meetings because he hopes to see change. This isn’t change in investigative developments or progressing clinical trials—he hopes to see if healthcare providers have improved themselves in the last year. “These people at the scientific conventions are all about patting themselves on the back, and some of them don’t even see patients,” he noted.

It’s almost unbelievable to him, that physicians and clinicians specializing in one of the most widespread diseases and greatest causes of death in the nation are capable of saving lives daily, yet some don’t. His tone becomes exhausted when the topic of black community-centric health research comes up; he’s seen enough numbers. Mattocks wants results.

“Going to get someone tested today, can save a life today,” he said. “At the end of the day, it’s really about the patients’ lives today, not tomorrow.”

The way Mattocks describes a doctor’s office visit is akin to a Choose Your Own Adventure book. Every word and action to come from the patient dictates which diagnosis they may receive, what tests the physician will order, what sort of treatment they’ll be exposed to. Mattocks has caught himself praying he doesn’t bother a physician with questions about his life-threatening disease. None of this should be happening.

What they would want and expect, in the face of uncertain health, is the same thing: compassion, from someone who’s trying to save them.