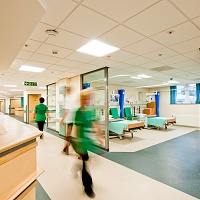 Brief admission (BA) by self-referral to a hospital for suicidal and/or self-harming actions is not more effective than standard treatment, according to a new study.

Data was collected 6 months retrospectively at baseline and at 6- and 12-month follow-ups via a single-masked Brief Admission Skåne Randomized Clinical Trial, which was conducted from September 2015 to June 2018 at 4 psychiatric health care facilities in Sweden.

The study—which was approved by the Regional Ethics board at Lund University and led by Sofie Westling, MD—followed the Consolidated Standards of Reporting Trials (CONSORT) reporting guideline. All participants provided written, informed consent and were never offered incentives.

"We hope that our results can inspire health care providers to increase the influence on health care of individuals with repeated self-harm at risk for suicide," said Sofie Westling, MD, PhD, the lead investigator from Lund University, in an interview with MD Magazine®.

Inclusion criteria for the sample population included present incidents of self-harm and/or recurrent suicidality, at least 3 diagnostic criteria for borderline personality disorder, and hospitalization in the past 6 months. Participants (125) were randomly assigned to either BA and standard treatment (BA group, 63 members) or only standard treatment (control group, 62 members). The mean age was 32 years, and 84.8% of the subjects were women. Due to 2 participants exiting the study during follow-up, the final sample group consisted of 108 individuals.

Outcome measures included days admitted to the hospital, frequency of compulsory measures (such as restraints,) scores on the World Health Organization Disability Assessment Schedule II (WHODAS II), and scores on the 5 Self-harm Behavior Groupings Measure. Since all participants exhibited recurring self-harm, it was only considered to be an adverse event if it occurred during BA; participants would remain in the study unless they exhibited escalating self-harm, suicidality, or endangerment of others in the ward.

Overall, the new study failed to achieve a consensus regarding whether suicidal and/or self-harming individuals benefit from hospitalization. It did determine, however, that a hospital stay does not have any significant negative effects when combined with standard treatment.

"We expected a greater reduction in inpatient service utilization in the BA group, as compared to the control group, which was not found," Westling told MDMag. "However, we found greater improvements in daily life functioning in the BA group than expected."

Previous studies on the subject of hospital stays’ effect on overall treatment success for suicidal and/or self-harming patients have been conducted in Norway, but only to a limited degree. Most notable are a study of 54 participants with schizophrenia and bipolar disorder and another examining whether patient-controlled admissions reduced inpatient service use, compulsory measures, medication, and self-harm.

In the future, Westling said, "Studies should be designed to explore the effects of BA on measures such as daily life functioning and more detailed measures of self-harm."

The study, “Effect of Brief Admission to Hospital by Self-referral for Individuals Who Self-harm and Are at Risk of Suicide: A Randomized Clinical Trial,” was published by JAMA Network.

Click here to sign up for more HCPLive® content and updates.
Related Coverage >>>
Investigators Test Treatment Regimens for Psychiatric Disorders with Insomnia
Childhood Sleep Issues Foreshadow Psychosis, Borderline Personality Disorder
Inadequate Sleep Impacts Children's Emotional Health
You May Also be Interested in
Most Popular
Denise Daley, PhD: Early Asthma Interventions for Infants
Mindfulness-Based Stress Reduction and Benefits in Overweight Women
Most Common Drug Ingredient in the US Kills Emotions
Visual Impairment, Dementia Are Detrimental to Independence of Older Adults
What Should I Do With This Abnormal ALT?