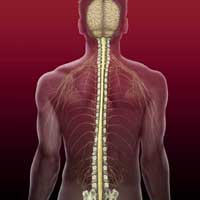 Spinal cord injury regeneration may be possible harnessing the brain repair mechanism known as axons, according to findings published in The Journal of Neuroscience.

Researchers from University of South Carolina examined RNA function in order to test the ability of axons to aid regeneration of nerves. The team set out to find a way to bridge what they called the “regenerative gap” between the peripheral nervous system and the central nervous system.

“If you injure a peripheral nerve, it will regenerate, spontaneously,” explained lead researcher Jeff Twiss in a press release. “It moves quite slowly, so it’s one of our objectives to speed it up, but it does regenerate. In contrast, with an injury to your spinal cord, it’s not going to regenerate.”

Over a five year period, the team focused on learning how the nerve constructs proteins. Any kind of re growth generated by the axons were noted as important building blocks, according to the researchers. Axons, the scientists learned, are responsible for communication between DNA and the proteins it can be converted into.

“The messenger RNAâ€‘â€‘these templates for making proteinsâ€‘â€‘actually go out into the nerve in the peripheral nervous system. When you injure a nerve, you need a lot of new protein, and we’ve shown that the messenger RNA is there to support regeneration of the nerve,” Twiss continued. “Although the neuroscience literature had said that that doesn’t occur in the spinal cord, we wanted to apply what we had learned in the peripheral nervous system and ask if it occurs when the central nervous system regenerates.”

By grafting a peripheral nerve into the space between severed spinal cords in an animal model, the researchers found nerve regeneration, while limited, was moderately successful. The messenger RNAs were responsible for interacting with the axons, as hypothesized. The researchers further hypothesized that the RNAs likely are used in the process of making new proteins as well.

The researchers added that these findings are important because spinal cord injury treatment is currently underdeveloped. The new approaches could contribute to better therapies and treatments, which can aid progress in this area. In the future, the researchers want to find a way to increase the regenerative capacity of the axons in such a way that it fine tunes the nerve, without having to surgically implant a patient’s peripheral nerve in as a graft. They believe that if they can understand the molecular mechanisms behind regeneration, they will have success in finding easier ways to boost regeneration.