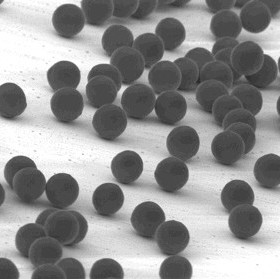 Credit: National Institute of Standards and Technology
A review article suggested that the use of encapsulated microspheres as a method of delivering treatment to patients with age-related macular degeneration (AMD) and other neurodegenerative retinal and optic nerve diseases may offer less invasive interventions and could allow for the development of powerful neuroprotective therapies that slow disease progression.

Authored by Irene Bravo-Osuna, PhD, with colleagues from the Department of Pharmacy and Pharmaceutical Technology at Complutense University in Madrid, Spain, the review argued that there are several "clinical issues” related to the management of neurodegenerative optic diseases which could be circumvented by use of biodegradable microspheres designed to carry low-molecular-weight therapeutic medications.

Bravo-Osuna remarked that the ability to target intraocular tissues with focused pharmacological therapies is "restricted by the effective static (corneal layers, sclera, retina, blood-aqueous and blood-retinal barriers) and dynamic barriers (tear dilution, conjunctival and choroidal blood flow, and lymphatic clearance)." According to the review, these barriers restrict bioavailability of treatment drugs in targeted areas without frequent interventions while also limiting treatment routes.

A potential path to improving the delivery of these drugs is through the use of biodegradable microspheres.

The combined need for improved targeting of intraocular tissues and concerns about the burden of invasive interventions on patients, such as frequent intravitreal injections of anti-vascular endothelial growth factor (anti-VEGF) drugs for AMD, Bravo-Osuna stated, has led to rising interest in alternative intraocular drug delivery systems (IDDS).

Current IDDS, such as non-biodegradable inserts or implants, have the capacity to provide long-term delivery of beneficial molecules, but there is an advantage, the researchers suggested, to the use of biodegradable microspheres for the delivery of ophthalmic treatments including the ability of biodegradable microsphere to provide "long-term sustained drug release," and "safe dosing of drugs with pharmacokinetics issues such as a rapid systemic clearance or a narrow therapeutic window," according to Bravo-Osuna and colleagues.

Bravo-Osuna and colleagues pointed to the development of IDDS of corticosteroids such as the DEX implant (Ozurdex, Allergan) as an example of a therapy which could be improved upon with the use of biodegradable microparticulate delivery via microspheres.

The article stated that research interests in the use of polyester amides, or PEAs, for delivery of ophthalmic drugs is high, and that tests using PEAs as a delivery method for dexamethasone have "revealed high drug encapsulation efficiency (~85%) and controlled drug delivery for 90 days." Several other studies of controlled-released intraocular corticosteroids are looking to test biodegradable microspheres as a delivery method as well, according to the review authors.

Another area of development, according to Bravo-Osuna, is the microencapsulation of peptides and proteins which could open new lines of therapeutic options, although she cautioned that the delivery of these therapies via microsphere or microencapsulation comes with difficulties due to the high molecular weight of most proteins and peptides.

The review paid special attention to the potential use of biodegradable microspheres as an alternative IDDS for anti-VEGF therapies. Bravo-Osuna and colleagues noted that anti-VEGF therapy is effective in many patients with AMD, but its effects are short-lived, with only an intravitreal half-life of a couple days.

Bravo-Osuna and colleagues believe that active anti-VEGF compounds "could be largely optimized by including them in drug delivery systems able to release the compounds for longer periods of time (ideally several months)." They provided an overview of several studies underway to determine the effectiveness and stability of the anti-VEGF drugs ranibizumab, bevacizumab, and aflibercept during microencapsulation, pointing out that successful development of a delivery method for these drugs could help decrease injection burden on payments, lower costs of treatment, and provide sustained intravitreal release.

Bravo-Osuna and colleagues also seemed optimistic about the interest in using biodegradable microspheres as a delivery system for neurotrophic factors, and combination therapies, such as anti-VEGF plus corticosteroids, which target "different pathophysiological mechanisms in retinal complex pathologies."

Biodegradable microspheres allow, according to the authors, for multi-loaded delivery systems which help reduce injections while delivering multiple drugs "in a controlled fashion" as part of a combined-therapy approach to retinal diseases.

As an alternative IDDS for neurodegenerative retinal diseases, the use of biodegradable microspheres holds promise, Bravo-Osuna and colleagues wrote, and "advances in gene therapy and the ongoing clinical trials support the fact that this kind of treatment could become available in the coming future."

The study, "Microspheres as intraocular therapeutic tools in chronic diseases of the optic nerve and retina,” was published in Advanced Drug Delivery Reviews.

Click here to sign up for more MD Magazine content and updates.
Related Coverage >>>
Treat-and-Extend Regimen Noninferior to Monthly Injections for nAMD
The 10 Most Read Articles of 2019
The Clear Vision of Future Ophthalmology Care
You May Also be Interested in
Most Popular
Flu Vaccine Reduces Virus Severity in Patients, Regardless of Prevention
Women's Blood Vessels Age Faster
Early Intervention Could Improve Aortic Stenosis Outcomes
Top 10 Painkillers in the US
Dialysis Most Effective Treatment for Frail Patients with ESKD