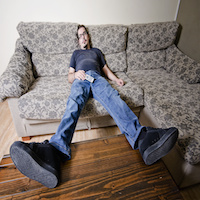 Couch potatoes, beware. According to a recent study presented at the European Society of Cardiology 2015 Congress (ESC) in London, UK, watching television for longer than five hours each day doubles the likelihood of suffering a fatal pulmonary embolism.

During one of ESC’s presentations, Toru Shirakawa, research fellow at the Department of Social Medicine, Osaka University, Japan and his colleagues shared their observation on the link between prolonged TV watching and fatal pulmonary embolism.

Shirakawa’s study included 86,024 participants between 40 and 79 years whose self-administered questionnaires were tracked between 1988 and 1990. Each participant was involved in detailed follow-up for an average of 18.4 years until 2009.

The study split the duration of TV watching among three groups: less than 2.5 hours, 2.5 to 4.9 hours, and five or more hours a day.

People who sat in front of the TV for more than five hours a day were found twice as likely to suffer a fatal blood clot compared to those who view less.

The researchers determined the risk of death from pulmonary embolism based on TV watching after adjusting for age at baseline, body mass index, drinking status, gender, history of diabetes, history of hypertension, menopausal status, smoking status, and walking and sports habits.

Shirakawa continued, "Leg immobility during television viewing may in part explain the finding. To prevent the occurrence of pulmonary embolism, we recommend the same preventative behavior used against economy class syndrome.”

With the increasing use of technological devices, sitting in front of the computer or other visual based media devices for long periods of time has become the norm.  As such, experts urge individuals to simply take breaks: stand up, walk around, and drink more water – prevention is key.

Click here to sign up for more HCPLive® content and updates.
Related Coverage >>>
Study Examines Link Between Folate Levels and CV Risk in RA Patients
Neurodegenerative Biomarkers in Cerebrospinal Fluid Not Linked to Narcolepsy
Bempedoic Acid and Ezetimibe Combination Approved by FDA for Lowering LDL-C
You May Also be Interested in
Most Popular
Gulf War Mystery: Why Is MS Onset Slower in Gulf Vets?
The Fear of the Coronavirus, and the Reality of the Flu
Fluoxetine Reduces Symptoms for Children with Autism Spectrum Disorders
New Immunotherapy Blocks Key Macrophage Checkpoint in AML Care
Top 10 Painkillers in the US