Barbie Puts on Weight: Is that a Problem? 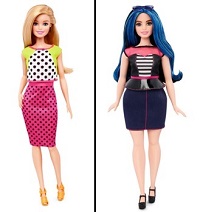 Diversity is the name of the game when it comes to Mattel’s newest additions to the Barbie family. The company announced today that the iconic doll with the impossible measurements now comes in plus-sized editions—as well as tall and petite. (Image from Barbie.com)

His hope is that the company is not just engaged in a marketing ploy but is “normalizing what is realistic.”

Rego said he remembers when advocates concerned about young girls comparing themselves unfavorably to traditional  Barbie took the doll’s measurements and blew them up to human size. “It wasn’t compatible with life,” he said.

Clearly that is not realistic. Also on the diversity front, Mattel today said it has made a wide range of  big changes to the Barbie image. Consumers will now have a choice of dolls with seven skin tones, 22 eye colors, and 24 hairstyles as well. So kids, or grownups, who’ve always wanted a curvy Barbie with blue hair and greens eyes, are in luck.

But not all adolescent psychiatrists were enthused.

While the diversity is empowering to kids who never had a doll that looked quite like them, there are worrisome aspects to having an obese Barbie.

Scott Krakower, DO, an adolescent psychiatrist and assistant professor of psychiatry at Hofstra Northwell School of Medicine, said he is perplexed at curvy Barbie’s arrival. He blames adolescent obesity in part on poor parenting decisions, such as regularly taking their kids to fast food chains. “Maybe they’ll start putting these dolls in Happy Meals,” Krakower joked. He would not recommend that a parent buy one for an adolescent struggling with her weight.

“Why can’t they just make dolls with regular proportions?” Krakower continued, adding that the traditional Barbie’s proportions are extreme.

According to Mattel, the main reason for expanding the Barbie line was to reach girls all around the world. In a news release the company said it wants to help all kids find a doll that speaks to them.

Krakower said, health is a larger and more important issue than expanding consumer choice in dolls.

“Being heavy has an impact on people’s self-esteem, but being obese is not healthy,” he said, “giving someone a doll that’s overweight won’t make that better.”

Click here to sign up for more HCPLive® content and updates.
Related Coverage >>>
Lumateperone Beneficial as a Schizophrenia Drug
BMI Bests Polygenic Risk Scores for Predicting Obesity Later in Life
Northwell Health Leveraging Chatbots to Reduce Colonoscopy No-Shows
You May Also be Interested in
Most Popular
The Fear of the Coronavirus, and the Reality of the Flu
Top 10 Painkillers in the US
European Trial to Investigate Exocrine Pancreatic Insufficiency in Patients with Type 2 Diabetes Mellitus
Plant-Based Diet Linked to Improved Gut Microbiome, Cardiovascular Health
Machine Learning Model Could Predict Outcomes Following Cardiac Arrest