Antifungal Drugs and Steroids May Be Able to Reverse Multiple Sclerosis 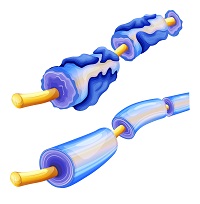 Multiple sclerosis (MS) may be able to be reversed by drugs already on the market that are designed to activate brain stem cells, according to findings published in Nature.

Researchers funded by the National Institute of Neurological Disorders and Stroke (NINDS) and the National Institutes of Health screened a library of bioactive small molecules in mice models in order to identify therapeutic compounds for enhancing myelination from specific cells. The investigators found that an antifungal (miconazole) and a steroid (clobetasol) may be the trick to repairing the brain’s white matter, which possibly would assist the reversing of MS.

“To replace damaged cells, the scientific field has focused on direct transplantation of stem cell derived tissues for regenerative medicine, and that approach is likely to provide enormous benefit down the road,” senior author Paul J. Tesar, PhD said in a press release. “We asked if we could find a faster and less invasive approach by using drugs to activate native nervous system stem cells and direct them to form new myelin. Our ultimate goal was to enhance the body's ability to repair itself.”

In adult brains, there are oligodendrocyte progenitor cells (OPCs), which are stem cells that generate myelin producing cells, the press release explained. These cells multiply in MS patients’ brains in response to myelin damage, but do not effectively repair white matter. Tesar used this study to determine if OPCs are able to increase myelination.

The miconazole and clobetasol were able to stimulate both mouse and human OPCs which then generated myelin producing cells. The next step was to test the drugs after injection into mouse MS models to assess the cells’ ability to improve myelination and improve paralysis. Both results were achieved, though each drug functioned differently in the body.

“The ability to activate white matter cells in the brain, as shown in this study, opens up an exciting new avenue of therapy development for myelin disorders such as MS,” said NINDS program director Ursula Utz, PhD in the statement.

However, the investigators in the study cautioned that more research is needed before miconazole and clobetasol can be used in MS clinical trials. Currently, the drugs are approved for use in creams or powders for the surface of patients’ bodies. Their use and function in human injections is currently unknown.

“Off label use of the current forms of these drugs is more likely to increase other health concerns than alleviate MS symptoms,” Tesar concluded. “We are working tirelessly to ready a safe and effective drug for clinical use.”

Click here to sign up for more HCPLive® content and updates.
Related Coverage >>>
Is an Immediate Annuity for You?
Kenneth Koblan, PhD: Gaps in Treatment for Bipolar Depression
Kenneth Koblan, PhD: SEP-4199 Showing Promise Treating Bipolar Depression
You May Also be Interested in
Most Popular
Denise Daley, PhD: Early Asthma Interventions for Infants
Baloxavir Effective in Preventing Spread of Flu
When to Suspect Diarrhea is Symptom of a Clostridium Difficile
Top 10 Painkillers in the US
AIDS, Ebola, now Zika: What's Next for Anthony Fauci, MD