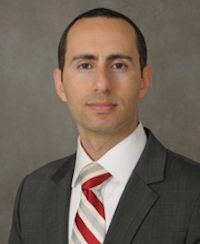 Guy Schwartz, MD
A systematic analysis of 712 references from the Cochrane Schizophrenia Group's Study-Based Register of Trials investigated the use or withdrawal of anticholinergic drugs in patients experiencing antipsychotic-induced tardive dyskinesia (TD).

Guy Schwartz, MD, neurologist, assistant professor and director of the Movement Disorders Section in the Department of Neurology at Stony Brook Medicine, explained the significance of these findings to MD Magazine.

Tardive dyskinesia (TD), a potentially life-changing side-effect of long-term antipsychotic drug use to treat schizophrenia or other psychiatric conditions, features symptoms of involuntary, repetitive eye blinking, grimacing, and uncontrollable body movements. Although stopping or tapering the drugs that contribute to it may help, TD is a chronic condition that can be treated but not cured.


The systematic analysis was done to discover whether the use or withdrawal of anticholinergic drugs like benzhexol, benztropine, biperiden, orphenadrine, procyclidine, scopolamine, or trihexyphenidyl has a clinically significant effect on the symptoms of TD.

Withdrawal of anticholinergic drugs has been investigated in the past to improve TD symptoms. While the reviewed studies were of poor quality, there is weak evidence that anticholinergics can also cause tardive dyskinesia, lead reviewer Hanna Bergmann noted.

Schwartz found that there was at least 1 systematic review that refuted this finding, from 2008, which examined the differences between patients who either remained on anticholinergics or were withdrawn.

“The 2008 review concluded that there was no difference between the 2 groups,” Schwartz said. “This supports the evidence that anticholinergics do not affect TD at all.”


One of the studies Bergmann examined found that many more participants receiving the anticholinergic procyclidine hadn’t significantly improved compared with those receiving the MAO-inhibitor isocarboxazid after 40 weeks' treatment. She also discovered no difference in the incidence of adverse effects or the acceptability of either treatment.

Another study compared anticholinergic withdrawal with anticholinergic continuation concluded that there was no strong evidence for using either option to treat the symptoms of TD.

Schwartz told MD Magazine that he has not used either for TD because in his experience, “they simply don’t help to relieve the symptoms.”

Based on the evidence, Bergmann concluded that no confident statement could be made about the effectiveness of anticholinergics — or withdrawal from it — to treat people with antipsychotic-induced TD.

“I hope that future research will concentrate on ways to reduce the adverse effects of antipsychotic medications and prevent TD,” Schwartz said.