Altering the Optics of Cardiovascular Disease: How the CANTOS Findings are Changing Physicians' Approach to CVD

MAY 24, 2018
Caitlyn Bahrenburg
The relationships between inflammation and cardiovascular disease (CVD) has long been recognized within the medical community. However, for nearly 2 decades, this question persisted: Can reducing inflammation directly reduce cardiovascular events? Until recently, the issue floated around and lacked a definitive answer.

However, because treatments such as statins affect both inflammation and low-density lipoprotein cholesterol (LDL-C), it’s difficult to determine whether benefits are directly correlated with decreases in inflammation or reductions in LDL-C, according to Deepak L. Bhatt, MD, executive director of the Interventional Cardiovascular Programs at Brigham and Women’s Hospital's Heart & Vascular Center in Boston, Massachusetts.

The Canakinumab Anti-Inflammatory Thrombosis Outcomes Study—or CANTOS— arguably shifted treatment paradigms when it was published in the New England Journal of Medicine. Conducted by Ridker et al, the trial focused on anti-inflammatory therapy for atherosclerotic disease without affecting lipid levels.1

“Up until now there has been some skepticism about whether a dedicated anti-inflammatory approach [would] have a cardiovascular benefit,” Bhatt said, “but now CANTOS has proved it.”

The trial was a randomized double-blind examination of canakinumab, a therapeutic monoclonal antibody targeting IL-1β. The trial involved 10,061 patients with previous myocardial infarction and a high-sensitivity C-reactive protein (hsCRP) level of at least 2 mg/L, according to the study results.

Researchers compared canakinumab with a placebo in 3 doses—50 mg, 150 mg, and 300 mg—administered subcutaneously every 3 months. Results showed that, compared with the placebo group, at 48 months the median reduction from baseline for hsCRP levels was 26% greater in the group that received the 50-mg dose, 37% greater in the 150-mg group, and 41% greater in the 300-mg group (see FIGURE 1A).

Researchers concluded that anti-inflammatory therapy targeting the IL-1β innate immunity pathway with 150 mg of canakinumab every 3 months led to a significantly lower rate of recurrent cardiovascular events than placebo, independent of lipid-level lowering (see FIGURES 1B and 1C).

According to Gunn, the medical field is “on the cusp” of altering the way inflammation related to CVD is treated and opening the door to improved targeted therapies. “The CANTOS trial [has] taken a drug that doesn’t affect cholesterol levels but reduces inflammation and has shown pretty convincingly that [a] very targeted approach can help reduce inflammation but also reduce rates of cardiovascular events,” Bhatt said. “In a subsequent paper… those doctors showed if there [is] a significant reduction in C-reactive protein levels, that those patients actually have pretty pronounced benefits, including lower rates of mortality.

“It really does validate what until now has been considered a hypothesis: [that] inflammation plays a central role in CVD,” Bhatt added.

With the relationship between inflammation and CVD convincingly proved through CANTOS, the spotlight now turns to treatment. “I think that CANTOS, scientifically, is extremely important,” Bhatt said. “What happens with that particular compound, canakinumab, that’s really an issue that the company that makes the drug has to sort out. Are they going to market it for that indication? How will they price it?” 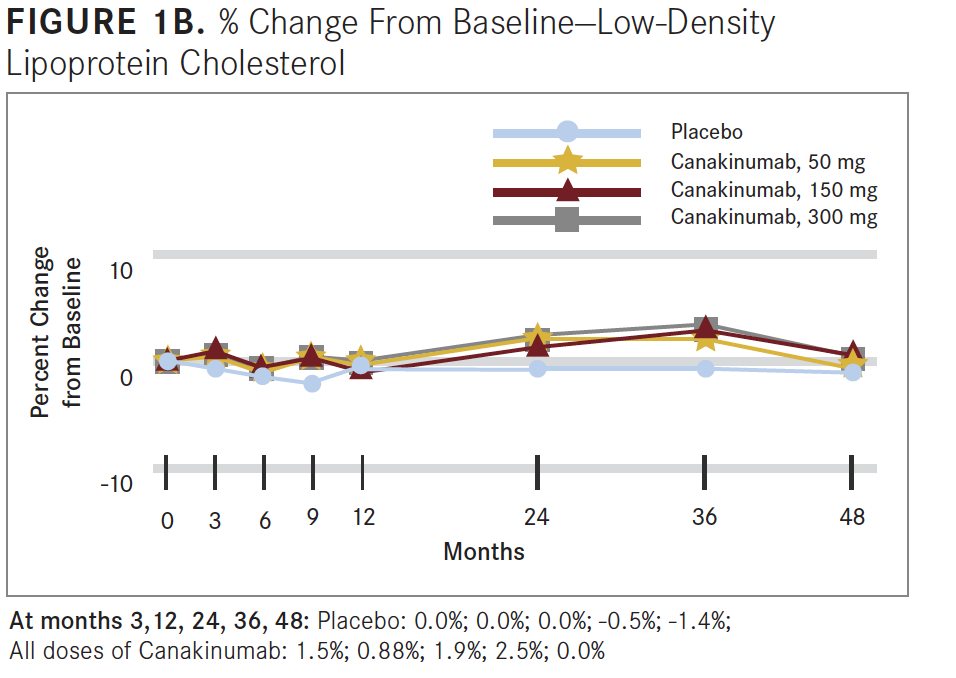 CANTOS did not establish a method of treatment that is likely to be widely available and affordable to patients, at least not immediately. Bhatt pointed to practical issues that remain, but he acknowledged that with such promise, the medication could be useful in an era when other medications for LDL-C, such as proprotein convertase subtilisin/kexin type 9 inhibitors, are expensive.

For Gunn, it’s more of the same. What’s needed now is the development of more generally applicable, inexpensive drugs that target the inflammatory pathways, he said. “There are a lot of immune therapies that have come online in recent years. Things for [the] treatment of cancer…have been incredibly effective, but they’re also very expensive,” he said. “Whereas it’s reasonable to have a therapy that costs $50,000 if you have metastatic cancer that needs to be cured, it’s not feasible to spend that amount in the general population to reduce the risk of atherosclerosis.”

A targeted approach, like the one used in the CANTOS trial, will likely be prohibitively expensive for some patients, which begs the question of necessity for all cases and patients, according to Bhatt. “Can we use more of a shotgun approach of drugs that target inflammation through multiple pathways and are cheaper and also that have the potential for maybe more [adverse] effects because they are targeting multiple pathways?” he theorized. “That’s probably the biggest question right now because if it turns out we need really precise targeted therapy, that’s OK. There can be a scientific advancement on that basis, but it would most likely be a while before any of those drugs are going to be really cheap.”

That shotgun approach would allow the use of more readily available and generic therapies that are not just efficacious but also cost-effective. “It might be for certain types of really high-risk patients, you need the expensive targeted approach. For low-risk patients, maybe [a] more broad, active, gentler approach to inflammation might be sufficient,” Bhatt said.

Either way, this will be a fertile area of research for the foreseeable future, according to Bhatt, as the answers get sorted out over time.

That work is already underway, Gunn noted, with scientists exploring the best way to provide inflammation-targeted therapies. “Certainly, the pharmaceutical companies are taking a hard look at this,” he said. 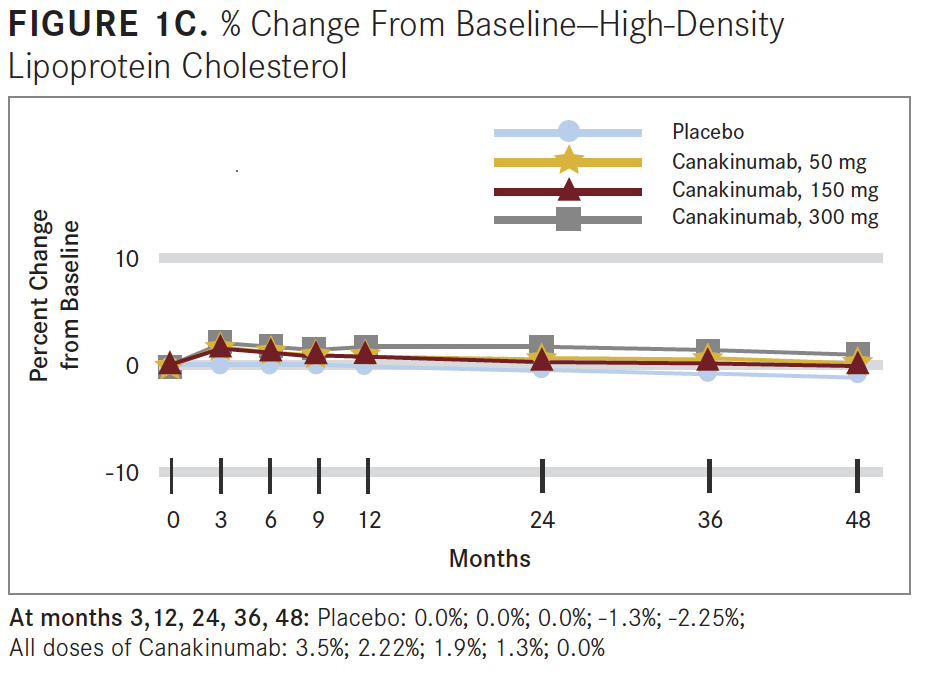 Following the CANTOS trial, Bhatt said, he believes the opportunity for new research within the cardiovascular realm will increase, giving way to innovative medicines and finding novel applications for existing drugs. “Things are really very hot in the world of inflammation,” he said.

It appears physicians have already caught on. In a small trial in patients with stable ischemic heart disease, colchicine, an anti-inflammatory drug commonly used to treat gout, reduced major cardiovascular events, Gunn said. “Two other trials are underway with colchicine in patients with coronary artery disease,” he told MD Magazine.

Additionally, the ongoing Cardiovascular Inflammation Reduction Trial is testing potential beneficial effects of low-dose methotrexate, a drug that for decades has been used to treat autoimmune diseases in patients after a heart attack or who have coronary artery disease and diabetes.

“From a physician’s perspective, it will be very important to keep an eye on the field, because I think a bunch of different scientists, companies, and independent investigators are going to start testing various anti-inflammatory drugs to see if there is a cardiovascular benefit,” Bhatt said. “Companies that have anti-inflammatories will say, ‘Oh, we have anti-inflammatory [drugs] for whatever condition. Let’s test it for CVD.’ I think you’ll be seeing a lot more trials.”

CANTOS has altered the way physicians approach CVD by proving what previously existed as a hypothesis. Time will tell whether that progress will continue and alter treatment for CVD. However, as noted by Gunn, the field is on the cusp of viewing this issue through a new lens. REFERENCE
Ridker PM, Everett BM, Thuren T, et. al. Anti-inflammatory therapy with canakinumab for atherosclerotic disease. N Engl J Med. 2017;377(12):1119-1131. doi: 10.1056/NEJMoa1707914.

Click here to sign up for more HCPLive® content and updates.
Related Coverage >>>
Study Finds Marijuana Use Not Linked to Increased Stroke Risk
FDA Approves Ticagrelor DAPT for Patients Without CVD, Stroke History
Heart Failure Patients Could Benefit from Palliative Care
You May Also be Interested in
Most Popular
Adam Friedman, MD: Returning to Normal During the COVID-19 Pandemic
Ixekizumab Improves Signs and Symptoms of Psoriatic Arthritis
Immunotherapies at the Forefront of COVID-19 Treatment Research
Understanding the Pathophysiology of Crohn's Disease
Secukinumab Reduces Spinal Pain for Axial Spondyloarthritis