Alcohol Is More Harmful to Hepatitis C Than You Think 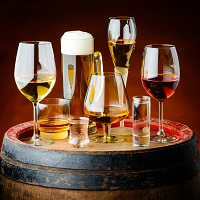 From years of research on alcohol, we know that excessive consumption of it can be very bad, while moderate consumption may actually be quite good for your health. Some studies suggest that red wine can help prevent heart disease, scientists are working to brew beer into cancer-fighting compounds, and recent research points to the possibility of tequila being used as the basis for a new osteoporosis treatment. However, one population that should steer clear, or at least limit their intake, of alcohol is those with hepatitis C.

“Alcohol promotes faster development of fibrosis and progression to cirrhosis in people living with hepatitis C, making drinking a dangerous and often deadly activity,” lead investigator Amber L. Taylor, MPH, from the Division of Viral Hepatitis at the Centers for Disease Control and Prevention (CDC), said in a news release.

The CDC team analyzed data from 20,042 people in the National Health and Nutrition Examination Survey (NHANES). The participants reported demographics, hepatitis C-RNA status, and alcohol consumption levels from 2003 to 2010. The researchers separated the alcohol information into one of four categories: lifetime abstainers, former drinkers, non-excessive current drinkers, and excessive current drinkers. It turns out that former drinkers and excessive current drinkers had higher prevalence of hepatitis C (2.2% and 1.5%, respectively), as described in the American Journal of Preventive Medicine. The lifetime abstainers and current non-excessive drinkers had lower prevalence of the condition (0.4% and 0.9%, respectively).

Further investigation estimated that those with hepatitis C (or who were previously infected) drank five or more alcoholic drinks a day, almost every day, at some point in their life. This is about 3.3 times more than people who have never been infected (43.8% vs. 13.7%). The findings were controlled for age, sex, race, education, and healthcare availability.

A major problem with this condition is that an estimated half of all patients don’t even know that they’re infected with hepatitis C. Therefore, they could be accelerating their condition with alcohol without being aware of it. In fact, a follow-up survey conducted in this analysis revealed that 50% of the NHANES participants did not know that they were infected until they were notified during the study.

“The implementation of behavioral screenings to identify at-risk drinking among both hepatitis C-infected and uninfected individuals could prevent alcohol abuse and serve as a platform to educate patients on the associated risks,” Taylor continued.

Alcohol-related liver disease proved to be the third leading cause of death among those with hepatitis C in 2010. So to say that this research is important is an understatement.

Click here to sign up for more HCPLive® content and updates.
Related Coverage >>>
Jamak Modaresi Esfeh, MD: Finding Hepatic Encephalopathy
VistaScan Mobile UltraSound Platform Receives 510(k) Clearance
FDA Announces First ProAir HFA Approval
You May Also be Interested in
Most Popular
The Fear of the Coronavirus, and the Reality of the Flu
Top 10 Painkillers in the US
When to Suspect Diarrhea is Symptom of a Clostridium Difficile
Father's Depressive Behaviors Negatively Influence Children
Bempedoic Acid and Ezetimibe Combination Approved by FDA for Lowering LDL-C