NOVEMBER 29, 2017
Jenna Payesko
@Jenna_Pay
Despite advances enabling the provision of safe abortions at the primary care level, unsafe abortions persist and lead to a high burden of complications, maternal death and substantial costs, according to a recent global analysis.

Through the collaborative work of WHO, the Department of Reproductive Health and Research, and the Guttmacher Institute, researchers used all available empirical data on abortions, methods, providers, settings and factors that affected safety within a Bayesian hierarchical model to estimate the global, regional and subregional distributions of abortion by safety categories from 2010–2014. 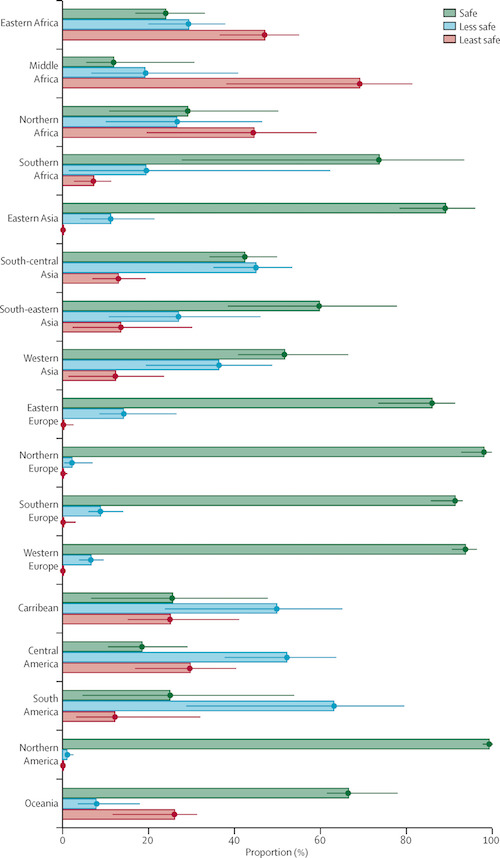 "Nevertheless it is surprising  — indeed heartbreaking — to see that over 25 million abortions in the world (almost 1 in 2) occur unsafely," Bela Ganatra, lead author, scientist, Department of Reproductive Health and Research, World Health Organization (WHO), told MD Magazine. "This is despite the fact that medically speaking, safe abortion is a simple, safe primary care level service. It’s not science that is holding us back, its stigma, its politics, it’s the lack of trained persons, it’s the many barriers that make it hard for women to access these services."

This study measured abortion safety on a 3-tiered classification based on the WHO definition of unsafe abortion and WHO guidelines on safe abortions. The categories included safe or unsafe and further divided unsafe abortions into less-safe and least-safe.

Abortions were classified as less safe if only 1 of the 2 criteria were met, either the abortion was done by a trained provider but with an outdated method, or a safe method of abortion was used but without adequate information or support from a trained individual.

Least safe abortions constituted as those provided by untrained individuals using dangerous methods like ingestion of caustic substances, insertion of foreign bodies or use of traditional concoctions.

Despite the simple and safe primary care intervention options available for safe abortions, combining the less-safe and least-safe categories, 25.1 million abortions were performed in unsafe circumstances each year, of which 24.3 million (97%) took place in developing countries.

The proportion of unsafe abortions was significantly higher in developing countries compared to developed countries — 49.5% versus 12.5%.

The distribution of abortions across safety categories were similar across developed subregions with the exception of eastern Europe, where the proportion of safe abortions was marginally lower than other subregions in Europe.

Compared to developing regions, eastern Asia had a safety distribution similar to that of developed countries.

Looking at the Australia-New Zealand subregion, researchers found that 92.3% of abortions were safe, which followed the pattern of other developed regions.

When the legal status of abortion safety was considered, 87.4% of all abortions in the 57 countries in which abortion was available on request, were safe, compared with 25.2% in the 62 countries where abortion was completely banned or allowed only to save a woman’s life or preserve her physical health. In legally restrictive settings, nearly a third of abortions, 31.3%, were categorized as least safe.

The study results showed a disparity in safety between developed and developing regions. Almost all abortions in developed countries were deemed safe, although a small proportion of less-safe abortions were also seen.

In eastern Europe, and many parts of Asia, development of evidence-based national standards, guidelines and training of providers could result in great improvements in the safety and quality of care, the authors said.

The subregions with the highest proportion of safe abortions (northern Europe and northern America) also showed the lowest incidence of abortion. Many countries in these subregions have less restrictive laws on abortion, high contraceptive use, high economic development, high levels of gender equality and well-developed health infrastructures, which suggests low incidence of abortion and high safety is possible.

The analysis showed a positive association between safe abortions and less restrictive laws, which promotes an enabling environment for trained providers and improved access to safe methods, suggesting that both legal grounds and overall development of a country play a part in abortion safety.

Stigma related to seeking or provision of abortion is increasingly being recognized as having an effect on how and where women access care and who can provide care, according to the authors,

“Stigma remains a major barrier to safe services also in countries with legal abortion. In future estimates, influence on stigma and refusal to provide services should be further addressed,” said Kristina Gemzell-Danielsson, MD, PhD, of the Karolinska Institutet, in an editorial response, published in the Lancet.

In the study, researchers analyzed data from 182 countries and regions listed by the UN Department of Economic and Social Affairs (UN DESA) Population Division, excluding small countries with populations fewer than 100,000 inhabitants.

This study is the first to explicitly align the operational estimation of safety categories with the conceptual definition of unsafe abortion and the technical standards of care, both outlined by the WHO. It’s also the first to include uncertainty bounds around the estimates.

Researchers concluded that increased efforts are needed, especially in developing countries, to ensure access to safe abortions. Efforts are warranted to replace the use of unsafe methods. Authors highlighted the need for routine collection of monitoring data within health systems and to develop innovative research methods addressing data gaps to improve future estimates.

While efforts to increase the availability, accessibility and affordability of contraception can reduce the incidence of unintended pregnancies and consequently abortions, it’s essential to combine this with interventions to ensure access to safe abortions.

The study, “Global, regional, and subregional classification of abortions by safety, 2010–14: estimates from a Bayesian hierarchical model” was published in The Lancet.

Click here to sign up for more HCPLive® content and updates.
Related Coverage >>>
ACR Releases First Guidelines for Reproductive Health in Rheumatic Diseases
Young Mothers Face More Mental Health Hurdles
VistaScan Mobile UltraSound Platform Receives 510(k) Clearance
You May Also be Interested in
Most Popular
The Fear of the Coronavirus, and the Reality of the Flu
Partnering with Patients: Effective, Patient-Centered Care for Chronic Pain
Socioeconomic Status, Racial Disparity at the Heart of US Pollution
Rewired Stem Cells Could Provide Their Own Arthritic Drug, Research Finds
Epidemiological Investigation of Rheumatoid Arthritis Links Manual Labor to the Disease