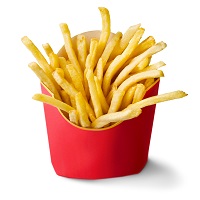 Just in time for National Potato Chip Day, the Food and Drug Administration (FDA) has released a guidance for the food industry on ways to reduce a potential carcinogen in the salty snack food, as well as in French fries.

Starchy foods, such as bagels, were recently targeted for being linked to lung cancer. Now officials are flagging foods like French fries and potato chips for containing acrylamide, a dangerous chemical that may cause cancer.

In 2002, it was found that many heated foods contain the chemical acrylamide. It’s been demonstrated that high doses of the chemical in food causes cancer in animals, and researchers say that it’s fair to believe it can have the same outcome in humans.

But potato-based foods aren’t the only ones being alerted, the chemical is also found in grain-based foods like cookies, pretzels, crackers, toasted bread, and cereal – and even coffee. To put the cancer concern in perspective, acrylamide is also found in cigarette smoke and plastic products. Cooking time and technique have a lot to do with acrylamide levels.

“Acrylamide forms in foods from a chemical reaction… this reaction is part of the Maillard reaction, which leads to color, flavor, and aroma changes in cooked foods,” the guidance said. The chemical usually forms when food is baked or fried above 248° F.

Frozen French fries that are intended to be cooked in a consumer’s home are not naturally filled with the chemical. Fries with a larger surface area relative to the volume may reduce acrylamide since is tends to form in the surface layer instead of inside. When it comes to potato chips, higher temperatures and longer cooking time result in higher acrylamide levels. The chemical especially increases towards the end of frying.

To combat the chemical formation, the guidance suggests lowering the temperature when cooking and using techniques like flash, vacuum, or batch frying. In addition, smaller or thinner pieces of potatoes require less heat and cooking time, which could also help reduce acrylamide.

This may seem like a lot of work (after all, cooking frozen foods is supposed to be a quick meal option), but there’s no such thing as being too careful.