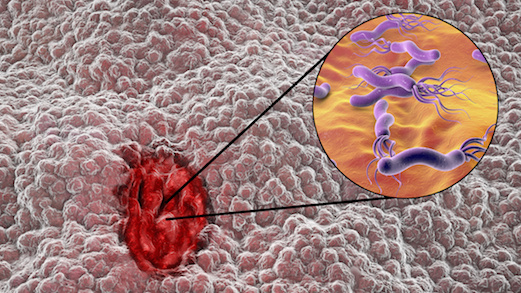 The new rules include looking at selected patients taking aspirin or NSAIDs, unexplained iron deficiency anemia, and idiopathic thrombocytopenic purpura and testing patients for this infection.

Doctors typically test blood, breath, or stool, when looking for H. pylori. The most effective existing treatment is a combination of antibiotics and acid-reducing medications.

It’s been a decade since the last ACG guideline update in 2007, but it’s also been 10 years of significant advances in treatment and management of the infection. As such, the new guideline was primarily based on data published up to September 2014. The research team used the GRADE system to assess the strength and value of each recommendation based on available literature and evidence.

The bacteria have been previously reported in approximately two-thirds of the global population, causing peptic ulcers and stomach cancer.

However, according to William D. Chey, MD, FACG, division of gastroenterology, University of Michigan Health System, the primary highlights of the guideline include the expansion of indications to test for and treat H. pylori infection beyond just peptic ulcer disease, dyspepsia, function dyspepsia, early gastric cancer, and mucosa associated lymphoid tissue lymphoma.

Patients with gastroesophageal reflux disease (GERD) symptoms who did not have history of peptic ulcer disease previously didn’t need to be tested for H. pylori infection. While that hasn’t changed, the updated document also strongly suggests patients who do test for GERD symptoms should be informed that the effects of GERD symptoms are unpredictable.

The guidelines outlined the best regimens to use in North America when “patients have persistent infection despite previous antibiotic therapy for H. pylori”.  There were no changes to the recommendation that previously taken antibiotics should be avoided if H. pylori infection persisted.

Physicians are urged to ask their patients about their previous antibiotic exposure, in order to prescribe better, targeted therapies:

The guideline also published further details surrounding the drugs doses, and durations of recommended and suggested first-line and salvage regimens.