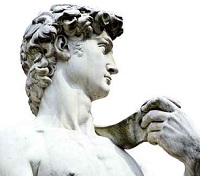 The great artist Michelangelo likely had osteoarthritis in his hands, an investigation by a Rome, Italy plastic surgeon and colleagues concludes.
Swollen joints and loss of fine motor skills did not slow the master down, however.

The legendary artist continued to sculpt and paint masterpieces late in his life  despite his apparent ailments, according to a essay written by Italian and Australian experts.

Lazzeri and his colleagues noted that over the years previous experts have speculated that Michelangelo’s complaints in letters to his nephew about pain in his hands resulted from gout. In this essay, the writers counter that their analysis of three portraits of the artist as an older man the gout hypothesis "can be dismissed..."

There are no signs of the type of inflammation and swelling of fibrous tissues around joints in his hands that are characteristic of gout, they explained. "More likely, his suffering may be due to a degenerative modification of the small joints of his hands which may be interpreted today as osteoarthritis."

To reach their conclusions Lazzeri, the rendition of Michelangelo’s left hand in two contemporary portraits and one painted after his death. Michaelangelo was believed to be left-handed.

The first portrait was painted in 1535 when Michelangelo was 60 by Jacopino del Conte and shows his left-hand hanging downward. That hand shows "signs of a non-inflammatory articular disease (such as osteoarthritis)," the essay authors wrote.

The second portrait by Daniele Ricciarelli (also known as  Daniele da Volterra) was painted in 1544. Pompeo Caccini painted the third and posthumous portrait in 1595.