FEBRUARY 09, 2015
Michael R. Page, PharmD, RPh
Although 10 disease-modifying agents are available for patients with relapsing-remitting multiple sclerosis (RRMS), and more than 20 years have elapsed since the approval in the United States of the first traditional injectable agents for RRMS, until 2012 only 6 large head-to-head trials had evaluated these treatments directly.1 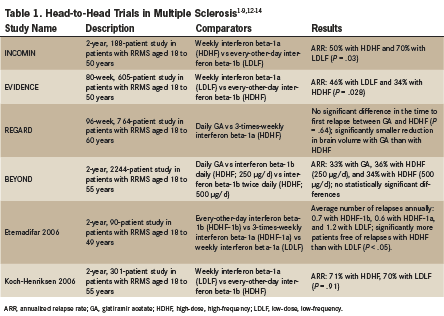 Two comparative studies, REGARD and BEYOND, demonstrated no significant difference in annualized relapse rates in patients with RRMS who were treated with either high-dose, high-frequency interferons or with glatiramer acetate. However, preliminary evidence from the REGARD study indicated that brain volume loss was significantly slower in patients treated with glatiramer acetate versus patients treated with high-dose, high-frequency interferon beta-1a.6,8

Comparative Data with Oral Agents
Unlike the older agents, newer oral agents for RRMS have been approved with pivotal trial data that include their direct comparison with the older injectable agents. The TRANSFORMS trial compared interferon beta-1a with oral fingolimod, and the pivotal CONFIRM trial compared glatiramer acetate with oral DMF.2,9 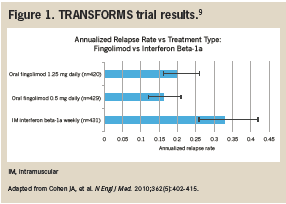 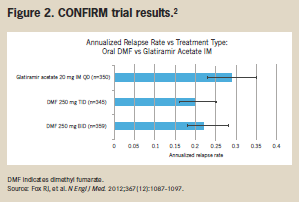 In summary, the availability of comparative pivotal trials with 2 oral agents (fingolimod and DMF) enables direct comparison of the tolerability, clinical efficacy, and expected reduction in relapse rates with these newer agents versus existing injectable agents. The CONFIRM trial and the TRANSFORMS trial offer patients with RRMS, and the health care professionals who care for them, more detailed information about the safety and efficacy offered by new agents for RRMS, with direct comparisons with older therapies.2,3

TRANSFORMS
The TRANSFORMS study was a 24-month,1027-patient extension trial that evaluated clinical results with patients transitioning from a low-dose, low-frequency interferon (weekly interferon beta-1a) to oral fingolimod in 1 of 2 doses (0.5 mg or 1.25 mg). All patients in the study had an initial Expanded Disability Status Scale (EDSS) score ≤5.5. Investigators monitored RRMS relapses, each patient’s EDSS every 3 weeks, and performed an MRI at baseline, month 3, and month 24.9 Annualized relapse rates were not significantly different with 0.5-mg or 1.25-mg fingolimod (16% and 20%, respectively). However, use of weekly interferon beta-1a was associated with a significantly higher annualized relapse rate (33%) than with either dose of fingolimod (P <.001).9

CONFIRM
The CONFIRM study was a 96-week, 1417-patient trial comparing clinical results with DMF 240 mg twice daily, DMF 240 mg 3 times daily, and a once-daily glatiramer acetate injection. All patients involved in the study had an initial Expanded Disability Status Scale (EDSS) score ≤5. Investigators monitored RRMS relapses and each patient’s EDSS every 12 weeks, and performed an MRI at baseline and at weeks 24, 48, and 96.2 Although all 3 treatments outperformed placebo, annualized relapse rates were lowest with DMF 240 mg twice daily (22%) and with DMF 240 mg 3 times daily (20%). In addition, annualized relapse rates were numerically, but not statistically, significantly higher with injectable glatiramer acetate (29%) than with either dose of DMF.2