OCTOBER 09, 2014
Jared Kaltwasser
Podiatrists
There were 10,700 podiatrists working in the US in 2010, according to BLS. That number is expected to grow by 23% by 2022. However, due to a relatively small number of projected new entrants, The Conference Board sees podiatry as facing the steepest labor shortage of any physician specialty by 2022. 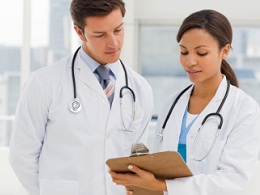 Optometrists
BLS expects the number of available optometry jobs in the US to jump by 24% in the decade ending in 2022. After factoring in projected new entrants, The Conference Board put optometrists just behind podiatrists when it comes to projected labor shortfall.

<< Previous Page (Page 1)
Continue Reading (Page 3) >>
You May Also be Interested in
Most Popular
Flu Cases Near 30 Million in the US, CDC Reports
Comparing RT-PCR and Chest CT for Diagnosing COVID-19
Limited Supply of Chloroquine, Hydroxychloroquine Could Affect COVID-19 Use
Ocular Symptoms Present in Almost a Third of COVID-19 Patients
How ACE2 Reduction Associated with Aging Affects COVID-19 Severity