How a Cruise Can Simplify Your Vacation

Only 11% of Americans have taken a cruise in the last 3 years, and these non-cruisers likely don’t know what they’re missing out on.

Despite a couple of years where several cruise lines and their passengers have taken a beating with unfortunate results and for the bad publicity regarding health and mechanical issues, a cruise is still a great vacation—and for busy physicians, it’s almost a perfect one.

Here’s why: Cruising simplifies a vacation. It removes a lot of the problems associated with personal travel. You can almost take off your watch and for doctors—who live and die by their appointment schedules—this, by itself, gives credibility to a cruise.

We often hear southeast Asia is the new Europe. Let’s talk about that destination for a moment. It may not be the best trip to arrange for your first cruise, because air may be complicated, but it’s a good example of how a cruise can simplify a vacation. 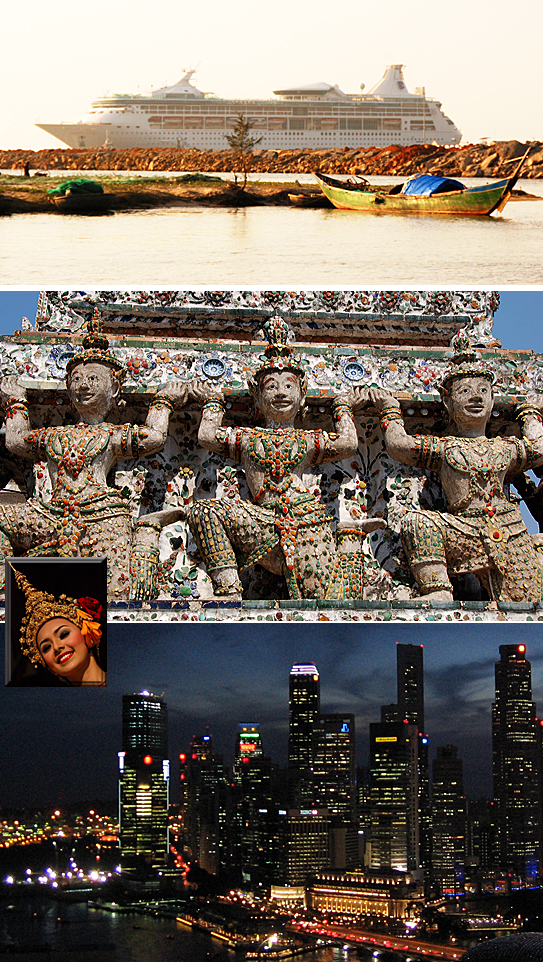 That’s the Royal Caribbean Rhapsody of the Seas in the background of the top image; we cruised this part of Asia for 13 days along with 2,433 other passengers. We began the cruise in Hong Kong with stops in Bangkok (middle image) and Singapore (lower image).

Major cities can help to make a cruise memorable. Many people cruising on this particular ship said they never expected to visit those cities ever again so they were really pleased to get even a small exposure to places with such mystical reputations. And to get the exposure with so little activity on their part. 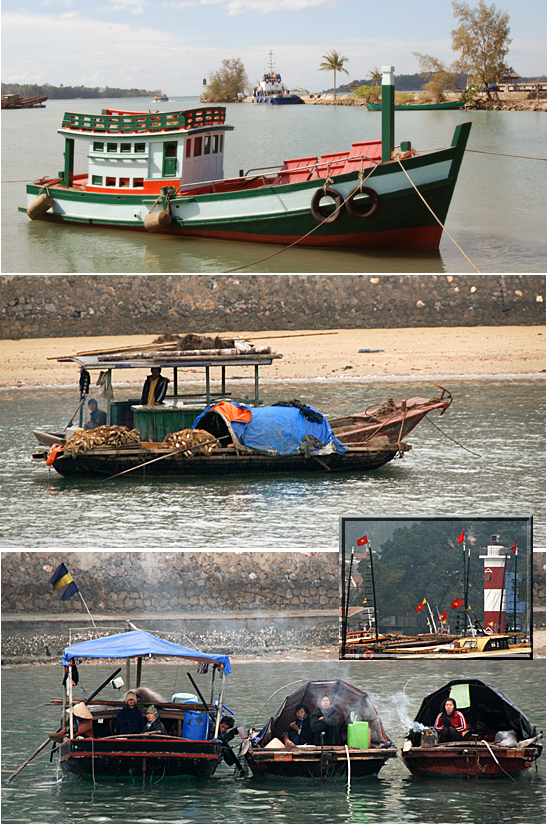 You’ll see a lot of boats, but none as comfortable as your cruise ship. And since Asia can be humid the assurance of returning to your ship’s air conditioning at the end of the day is most agreeable.

For those with Bucket Lists, a visit to places on them—even for a day visit by cruise ship—enables people to cross one more spot off the list. Tourist offices don’t criticize what might be seen as a superficial approach. They favor such visits because a quick look is often enough to make a tourist return for a longer stay.

So if, in Cambodia, you have a hankering to see, say, Angkor Wat you might find the easiest way is by cruise ship. And with upfront costs established, it may be both less expensive and less dangerous. 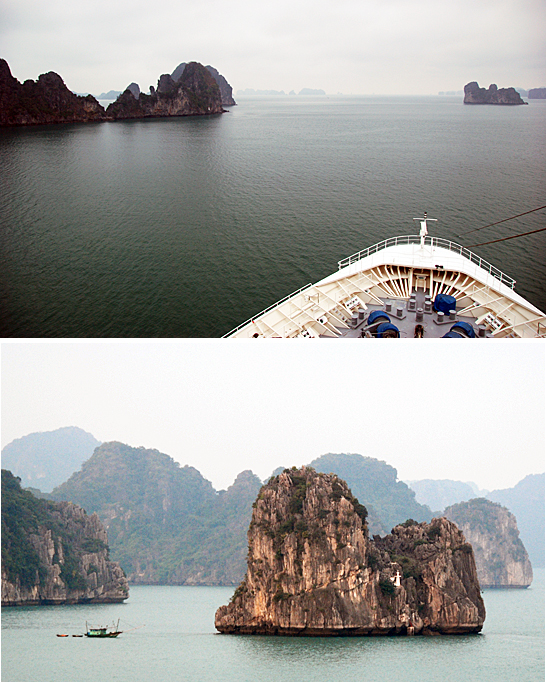 The karst islands of Ha Long Bay in the Gulf of Tonkin were formed when limestone eroded over millions of years.

Some parts of a foreign country spark interest from a traveler’s knowledge of history or a remembered scene in a movie or a photograph barely recalled from a high school’s geography text book. Such might be Ha Long Bay off northeastern Vietnam—one of UNESCO’s 5 World Heritage Sites. The bay stretches over 620 square miles of awesome seascape and you can sail amongst those karst islands on a cruise ship excursion 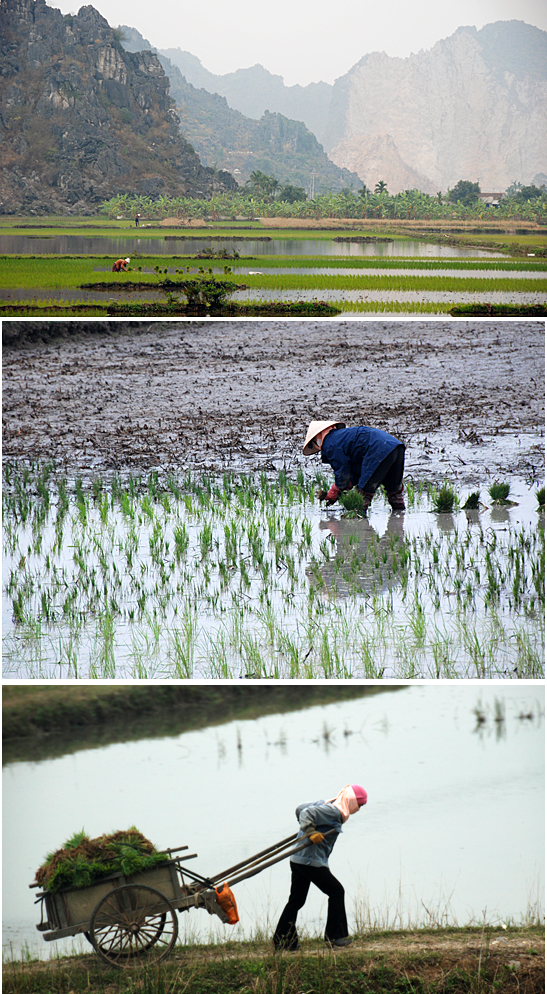 There are karst mountains as well all across southeast Asia and in the rice fields locals work hard to reap what they have planted.

On land, shore excursion guides know where they want the drivers to stop. Their tips from passengers may depend on whether the foreigners get good photographs with their smartphones. Their tips also depend on whether they get passengers back to the ship before it sails. (The ship will always wait for its shore excursion passengers, but not for those on their own personal travel if they are late coming back.) Vietnam has many canals and bridges are lifted up at irregular times for boats that need to pass.

That said, the 98 million people in North and South Vietnam seem to have forgotten the war that devastated America. The war ended in 1975 and more than 60% of the population has been born since. Douglas MacArthur was wrong: old soldiers do die. And once they are gone, young people forget the issues.

On the road from Da Nang to Hue lies a memorial for North Vietnamese soldiers killed in the Tet Offensive. A mother shows her child the statue of a local girl, then age 17, who helped dig a tunnel here to hide a wounded Vietcong. The girl, a combatant, holds her weapon high in her right hand but from her left hand, ready to fly, is the white dove of peace. 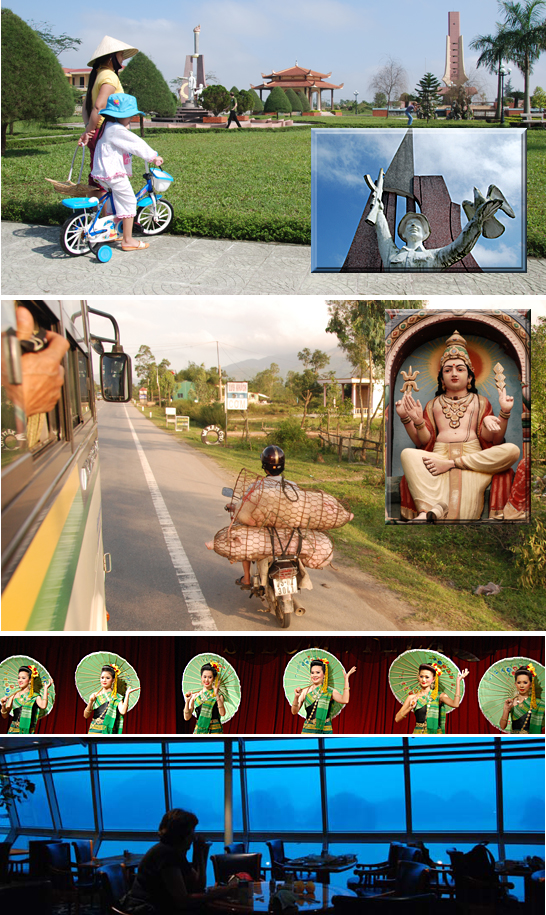 A memorial for North Vietnamese soldiers killed in the Tet Offensive. A farmer on his way to market. Asian live theater. Ha Long Bay still fascinates even at night.

Autonomous travelers in southeastern Asia would have trouble finding those places where cruises take them. Or finding locals who speak English and can explain what they are seeing. Even with a cruise to Vietnam and Cambodia, it takes time for ship personnel to arrange a visa for United States travelers.

Tourism in Vietnam is still in its infancy and American travelers staying independently in the country after a cruise would do well to choose an upscale hotel group like Anantara Resorts, which has Vietnamese resorts like the Anantara Hoi An and the Anantara Mui Ne with their reputation and ability to help if they run into problems.

But guides cannot completely enlighten Americans, who visit a foreign country hoping to gain better understanding of the world. We had an uncle who used to say, “Travel broadens the … feet!”

The Andersons, who live in San Diego, are the resident travel & cruise columnists for Physician's Money Digest. Nancy is a former nursing educator, Eric a retired MD. The one-time president of the NH Academy of Family Practice, Eric is the only physician in the Society of American Travel Writers. He has also written 5 books, the last called The Man Who Cried Orange: Stories from a Doctor's Life.

You May Also be Interested in
Most Popular
The Fear of the Coronavirus, and the Reality of the Flu
Magic Johnson Celebrates Life 25 Years After HIV Diagnosis
Bempedoic Acid and Ezetimibe Combination Approved by FDA for Lowering LDL-C
Diabetes, Severe Obesity Increases Risk of Offspring Psychiatric Disorders
Top 10 Painkillers in the US