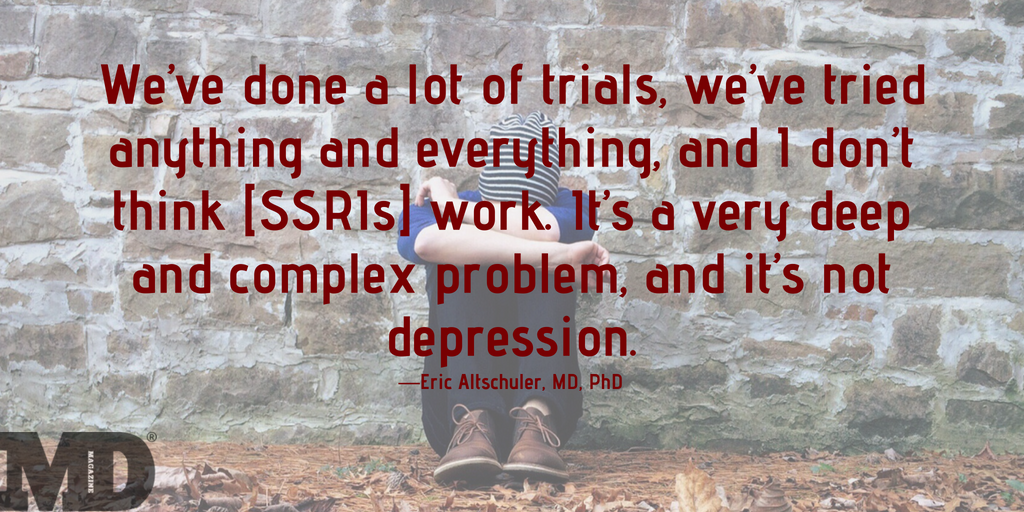 New medications continually emerge for a variety of diseases and disorders, but medications to treat patients with posttraumatic stress disorder (PTSD) have remained stagnant for decades.

Selective serotonin reuptake inhibitors (SSRIs), such as fluoxetine (Prozac, Eli Lilly), sertraline (Zoloft, Pfizer), and paroxetine (Paxil, GlaxoSmithKline) have dominated the market for the past 20 to 30 years and have remained the customary therapies for patients with PTSD, according to New York City-based psychiatrist Gauri Khurana, MD, MPH.

“I think there are other medications to treat [PTSD] that are effective, and for some reason, this isn’t galvanizing a lot of research interest,” Khurana told MD Mag. “The bigger moneymakers are in [attention-deficit/hyperactivity disorder] or antipsychotics.”

Despite a general lack of research into new treatments for PTSD, the disorder has a significant and widespread impact. “It’s really common, and it can happen to anyone,” said Eric Altschuler, MD, PhD, associate chief and residency program director of the Department of Physical Medicine and Rehabilitation at Metropolitan Hospital in New York City. “It’s really important we understand it.”

Approximately 7.8% of Americans will experience PTSD at some point in their lives, with women twice as likely as men to develop the condition. About 3.6% of adults aged 18 to 54 years—or 5.2 million people—have PTSD during a given year, according to the Nebraska Department of Veterans’ Affairs.

Notwithstanding the proven prevalence of PTSD among various populations, little has been done to spur innovation for new therapies. According to Israel Liberzon, MD, a professor of psychiatry, psychology, and neuroscience at the University of Michigan, SSRIs—specifically sertraline (approved in 1999) and paroxetine (approved in 2001)—are the only medications currently approved by the US Food and Drug Administration for the specific treatment of PTSD.

Muddying the water is the fact that there are differing levels of evidence supporting the use of these medications and secondary options. The 2017 clinical practice guideline for PTSD from the US Veteran’s Affairs and Defense Departments offers recommendations and suggestions for nefazodone (Serzone, Bristol-Myers Squibb), imipramine (Tofranil, Mallinckrodt), and phenelzine (Nardil, Pfizer) for instances in which sertraline, paroxetine, and fluoxetine are ineffective, unavailable, or poorly tolerated. However, those recommendations are weak, and 2 of the 3 secondary options—nefazodone and phenelzine—require careful management because of potentially serious toxicities.1

Liberzon added that there are no head-to-head data to suggest that a single SSRI is better than another. “Other [available] SSRIs are likely equally efficacious,” he said. Although Khurana says that these medications have proved to be effective for treating PTSD, she added that she has seen a positive response among patients who were willing to try medication in tandem with therapy sessions.

“This is what I tell my patients: Medications alone are good, therapy alone is good, but the combination together is synergistic,” Khurana said. “If the stars align and the patient wants to take the medication, it does help. I do add other medications to target other symptoms, but this is what I start with.”

Although SSRIs are generally accepted as an effective form of treatment for PTSD, the extent of their efficacy as monotherapy has been questioned, and there is some detraction from the belief altogether. In recent years, investigators have explored options such as psilocybin and methylenedioxymethamphetamine to fill the gap in treatment. Altschuler, for one, postulated that SSRIs, especially alone, are not an efficacious healing method.

“We’ve done a lot of trials, we’ve tried anything and everything, and I don’t think [SSRIs] work. It’s a very deep and complex problem, and it’s not depression,” said Altschuler, who has written several papers on the efficacy of animal therapy, including “Animal-Assisted Therapy for Posttraumatic Stress Disorder: Lessons From ‘Case Reports’ in Media Stories,” published this year.2

“I think that pet therapy with dogs is probably the best treatment,” he said. “One aspect of the human condition is continuity. When you experience PTSD, you had a traumatic event or lost something or watched this buddy die or had sexual trauma—this terrible break in continuity. It raises questions of existence…the dog provides continuity.”

Khurana stands by the efficacy of these medications used along with therapy, but even so, she is a proponent of eye movement desensitization and reprocessing therapy because it helps patients tap into and process emotions.

Additionally, Liberzon recommends prolonged exposure therapy as well as cognitive therapy to treat PTSD. “[The] effects are comparable, or higher, [with] what has been reported with medications,” he said. “However, not everyone has access to this type of specialized treatment or is able to tolerate an effective psychotherapy. Even then, psychotherapy is only partially effective.”

Although research into other PTSD medications has been limited to this point, according to Liberzon, investigators have recently begun exploring several other agents, such as ketamine, cannabinoids, and agents targeting the glutamatergic or orexin system.

A March 2018 study published in Progress in Neuro-Psychopharmacology & Biological Psychiatry by Hou et al examined the effects of ketamine on PTSD-like symptoms in a rat model of PTSD induced by a single prolonged stress and shock (SPS&S) procedure.3

The results showed that these behaviors were reversed by a single 15-mg/kg dose of ketamine. After receiving the ketamine, the rats showed significantly increased locomotor behavior in the open field test, intensified exploratory behavior in the elevated plus maze test, and decreased immobility time spent in the forced swim test. Furthermore, the rats experienced an increase in BDNF protein levels, while the expression of HCN1 was down-regulated, according to the study.

Results from another study, done with human subjects, published in March 2018 in Biochimica et Biophysica Acta by Basant et al showed that combined mindfulness psychotherapy and ketamine is effective in treating PTSD.4 The 20-patient study examined the length of sustained response with combined Trauma Interventions using Mindfulness-Based Extinction and Reconsolidation and ketamine.

Previously, results from studies had identified a negative correlation between antidepressant response to ketamine and basal plasma concentrations of d-serine (DSR). The findings of Basant et al showed that the basal DSR levels positively correlated with the pretreatment severity of PTSD symptoms (Pearson r = 0.42; P = .07), and patients with basal DSR levels of ≥3.5 μM displayed not only higher PTSD severity but also shorter duration of response.

These data indicate that basal DSR levels may serve as a biomarker for the severity of PTSD symptoms and as a predictor of clinical response, according to the authors, which could aid in the use of new therapies for the condition.

Regarding cannabinoids, another study, published in Progress in Neuro-Psychopharmacology & Biological Psychiatry by Burstein et al, examined whether they can prevent the long-term depressive-like symptoms induced by exposure to the shock and situational reminders (SRs) model of PTSD.5

Because these new agents for treating PTSD are currently being studied and are not yet approved, Liberzon refrained from commenting on their efficacy. “[There are] no newcomers that [have] been sufficiently studied and are approved,” he said.

You May Also be Interested in
Most Popular
Denise Daley, PhD: Early Asthma Interventions for Infants
Laparoscopic Ileocecal Resection Comparable to Anti-TNF's for Crohn's Disease
Flu Cases Near 30 Million in the US, CDC Reports
Childhood Sleep Issues Foreshadow Psychosis, Borderline Personality Disorder
Top 10 Painkillers in the US