Radiographs on admission revealed extravasation of barium into the peritoneal cavity. On the second hospital day, she had a transverse colostomy and rapidly developed severe postoperative oliguria, abdominal board-like rigidity, and hypotension. Her hospital course was complicated by the development of sepsis, myocardial infarction, and heart failure and she expired on hospital day 12.


An anterior posterior (AP) supine of the abdomen view was obtained at the time of admission. (Figure 1), The radiograph displayed free air and barium in the peritoneal cavity and retained barium lining the serosal surfaces of the large and small bowel. An  AP chest radiograph displayed shift of the trachea and cardiomediastinal structures to the left of midline with elevation of the diaphragm and linear atelectatic areas at both lung bases (Figure 2).


The autopsy confirmed bowel perforation, displaying blood dispersed over the mucosal surfaces of the large bowel with barium coating the serosal surfaces (Figure 4). The left lung had extensive fibrous adhesions and massive pulmonary edema. Hyaline membranes were prevalent as well as alveolar hemorrhage. The adrenal glands were atrophic. The liver demonstrated barium peritonitis, and the kidneys had many areas of hyalinized and swollen glomeruli and focal areas of necrotic tubules with eosinophilic granular material.


The final diagnosis indicated the patient had suffered perforation of the sigmoid colon that caused extravasation of air and barium into the peritoneal cavity. Other findings were bilateral pulmonary congestion secondary to congestive heart failure, uremic pneumonitis, and bronchopneumonia.


Although barium enema has generally been viewed as a safe diagnostic procedure, it can occasionally result in bowel perforation and become a surgical—and life-threatening—emergency. (1, 2) Recognizing the problem is vital, as barium in the peritoneal cavity causes macrophage proliferation and barium adhesive peritonitis. Rectal bleeding and mild abdominal complaints are common symptoms and may be followed by progressive sepsis and peritonitis. Recent advances in treatment have cut the mortality rate from about 50% to 35%. (2)

It is essential to have an accurate history and good bowel preparation in such cases. It is also important to help the patient understand how a barium enema is performed. Landmark anatomy on baseline scout radiographs with the catheter tip in the rectum must be reviewed before introduction of the barium, and post evacuation radiographs must be routine to avoid any complications.

The patient must notify any complaints to the health care provider such as difficulty with bowel movements or inability to have a bowel movement, pain and/or distention of the abdomen, stools that are smaller in diameter than normal, fever, and rectal bleeding. 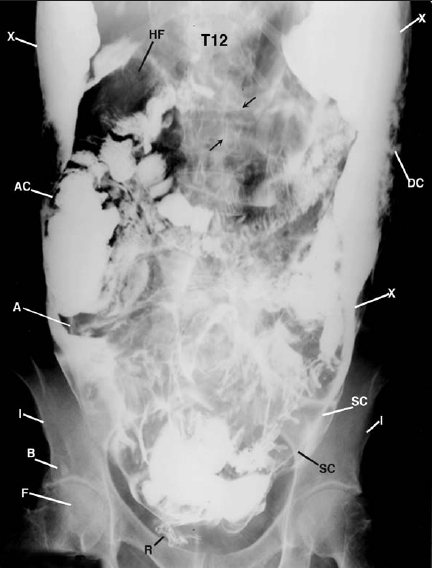 Figure 1 This supine anterior posterior abdominal radiograph displays free barium (X) within the peritoneal cavity of the abdomen and pelvis. Observe the lucency of free air (A) within the margins of the ascending colon (AC) and the hepatic flexure (HF); barium coating the serosal surface of the small bowel (arrows) and the lumen of the descending (DC) and sigmoid colon (SC), and narrowing of the right hip joint with a sclerotic density above the left acetabulum consistent with a bone island(B). F = femoral head; I = iliac bone; R = rectum; T12 = twelfth thoracic vertebra. 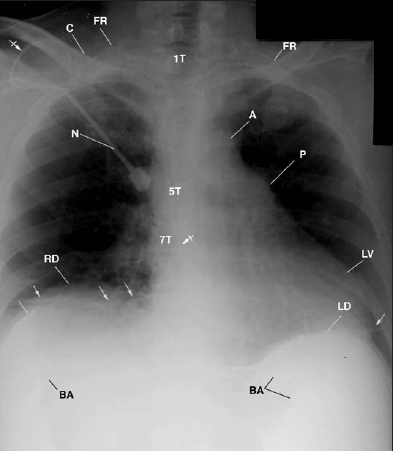 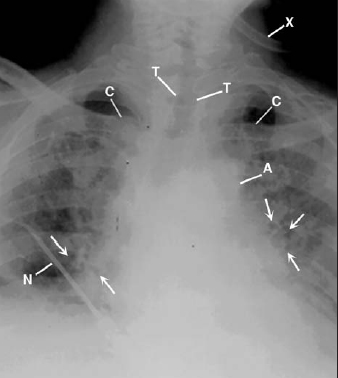 Figure 3 This is an anterior posterior chest radiograph displays air bronchograms (arrows) and the hazy amorphorus densities obscuring the aorta (A), diaphragm, and definition of both lungs, the left greater than the right. C = clavicle; N = needle; T = trachea; X = oxygen tubing. 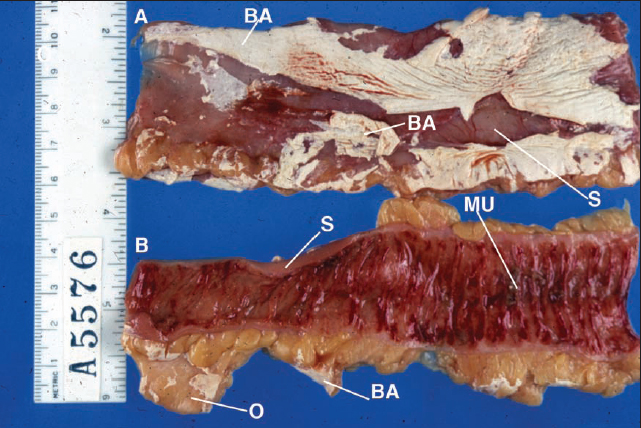 Figure 4 In these two fresh autopsy color specimens of the large bowel, strips of the white barium (BA) adhere to the serosal surface (S) in the upper section (A). The lower section (B) displays hemorrhagic mucosal folds (MU) and adhesive strips of barium (BA) on sections of the marginating omentum (O).