Elderly Woman With an Itchy Scalp

MAY 07, 2015
Daniel Stulberg, MD, Tracy M. Carlson, MD, MA
This 76-year-old woman presented to clinic with 8 weeks of severe scalp itching.  She  had previously been treated with emollient lotion, baby oil, a dandruff shampoo containing pyrithione zinc, and hydroxyzine.  Her past medical history includes eczema, hypertension, hyperlipidemia, paroxysmal SVT, GERD, and depression.  She is retired, volunteers at an elementary school, and does not drink alcohol, smoke tobacco, or use recreational drugs. 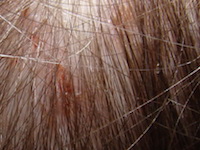 The patient’s scalp showed excoriations, and close examination revealed louse nits adhered to her hair shafts, confirmed by light microscopy.  She was likely exposed during her elementary school volunteer work.  Pediculosis capitis (head lice) is an ectoparasitic infestation commonly seen among school-aged children.  The pruritus is due to an irritant reaction to louse saliva.

Treatment options include over-the-counter topical pyrethrins or permethrin.  Prescription lindane and malathion have a higher risk of side effects.  More recently, oral treatment with ivermectin or trimethoprim/sulfamethoxazole has been used for resistant cases.1 Home remedies such as topical vinegar, isopropanol, olive oil, mayonnaise, butter, or prolonged water immersion have not been shown to be effective; petroleum jelly application appears to be 60% effective at killing lice, reduces egg laying and hatching.2 This patient was instructed to use an OTC permethrin cream for 10 minutes and repeat treatment in one week.  She was advised to wash her clothing and bedding  in hot water to prevent reinfestation.  The school nurse was notified so that any symptomatic children could also be treated.

Eczema can also present with erythema and pruritus.  In contrast to this case, there is usually scale and the distribution is rarely limited to the scalp.  Treatment includes decreasing inflammation with topical corticosteroids, moisturizing, and treating any secondary bacterial infections.3

Seborrheic dermatitis is characterized by waxy yellow scale, sometimes limited to the scalp, although it can also be seen in the eyebrows, nasolabial folds, and behind the ears. This condition is most often idiopathic but can be associated with HIV or Parkinson's disease.  It is not usually intensely pruritic and can be treated with anti-fungal shampoos, or, in severe cases, corticosteroids.4

Neurodermatitis is sometimes called “the itch that rashes” and is caused by a repeated cycle of irritation and scratching that persists long after the initial skin insult.  The scalp may be particularly susceptible to this type of disorder due to differences in the density of neurons and the distribution of vanilloid and cannabinoid receptors 5.  One would expect to see skin thickening and post-inflammatory hypo- or hyper-pigmentation in neurodermatitis.

Contact dermatitis can occur on the scalp as a reaction to hair products or clothing, and patients can often recall an exposure when asked.  In this patient, there were no new topical exposures correlating to the onset of symptoms.  The skin in this case is also non-erythematous, whereas contact dermatitis can present as a red rash that is sometimes vesicular or ulcerated.  Treatment includes applying topical steroids and avoiding the specific irritant or allergen.3

About the authors:
Daniel Stulberg, MD, is a Professor of Family and Community Medicine at the University of New Mexico. After completing his training at the University of Michigan, he worked in private practice in rural Arizona before moving into full-time teaching. Stulberg has published multiple articles and presented at many national conferences regarding skin care and treatment. He continues to practice the full spectrum of family medicine with an emphasis on dermatology and procedures.

Tracy M. Carlson, MD, MA, is a second-year Internal Medicine resident in the Primary Care Track at the University of New Mexico.  She graduated from Washington University in St. Louis School of Medicine with degrees in Medicine and Molecular Microbiology.  She is particularly interested in healthcare for underserved populations.


You May Also be Interested in
Most Popular
Schizophrenia Relapses and Patient Well-Being
Treatment Nonadherence and Schizophrenia Relapses
Tanezumab Outperforms Placebo, Tramadol in Improving Chronic Back Pain
Positive Results Treating Active Psoriatic Arthritis with Upadacitinib
Immunotherapies at the Forefront of COVID-19 Treatment Research