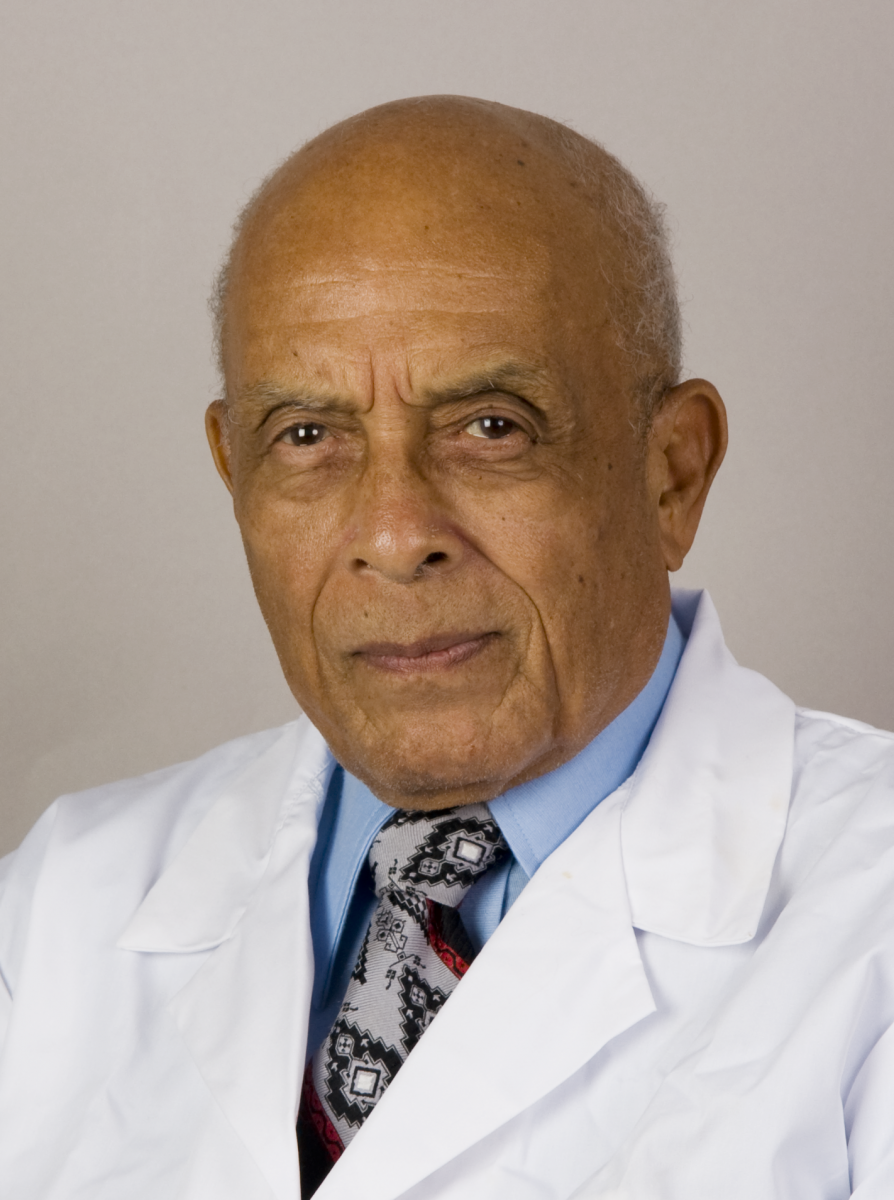 This is a 22 year-old male basketball player that complained of left foot pain with difficulty walking after slam dunking basketballs. Examination by his coach detected  mild swelling and tenderness over the outside of the left foot with discoloration over  the region of the left fifth metatarsal bone suggesting a possible fracture.  X-rays of his left foot were requested.

The images can be compared to a normal x-ray of a foot and ankle to better appreciate the osseous structures (2). The reader should understand that an x-ray displays only 70% of the anatomic structures because 30% of the x-ray beam is absorbed by structures imaged. The images selected for this case were enlarged and inverted to better display the landmark anatomy. 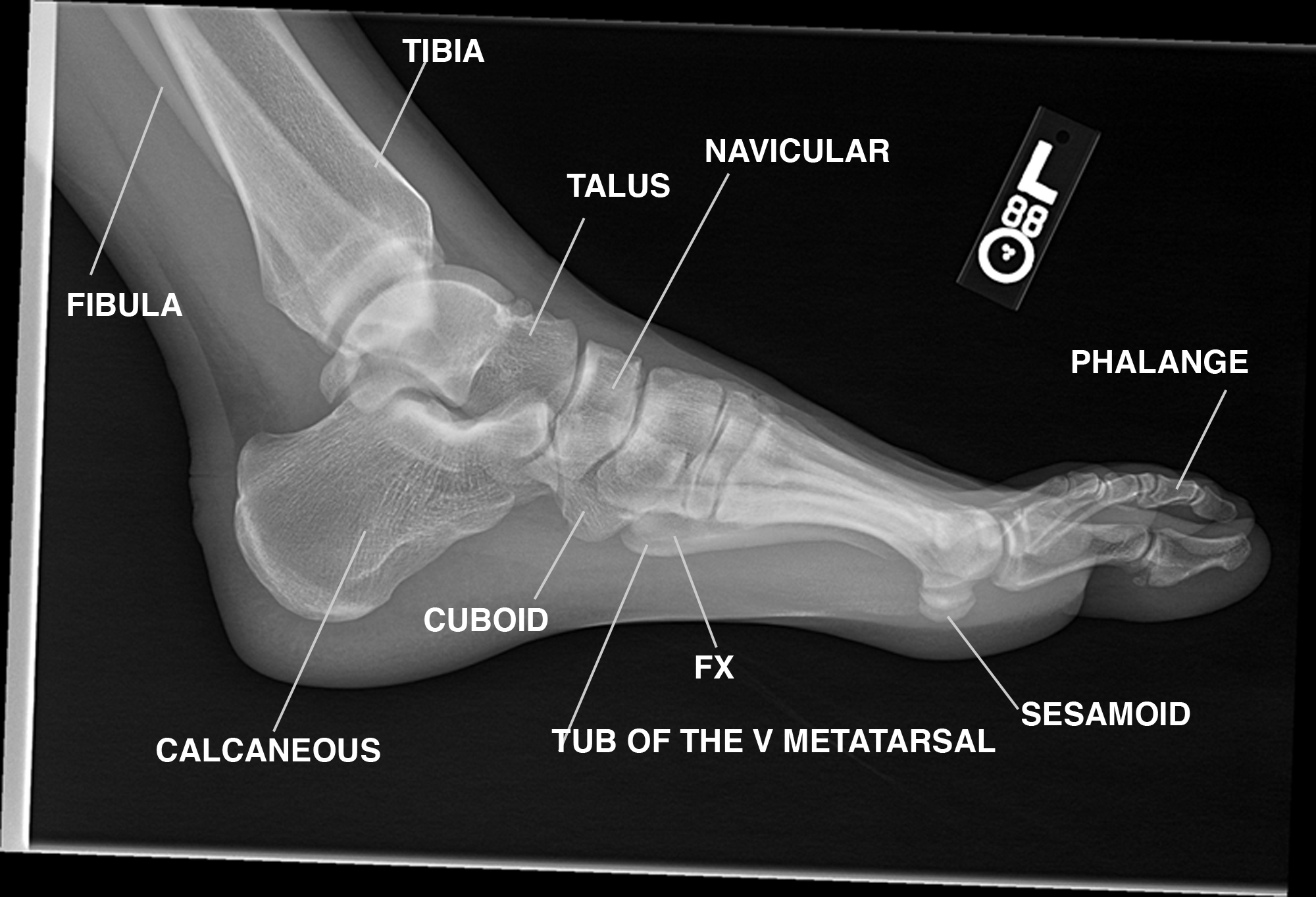 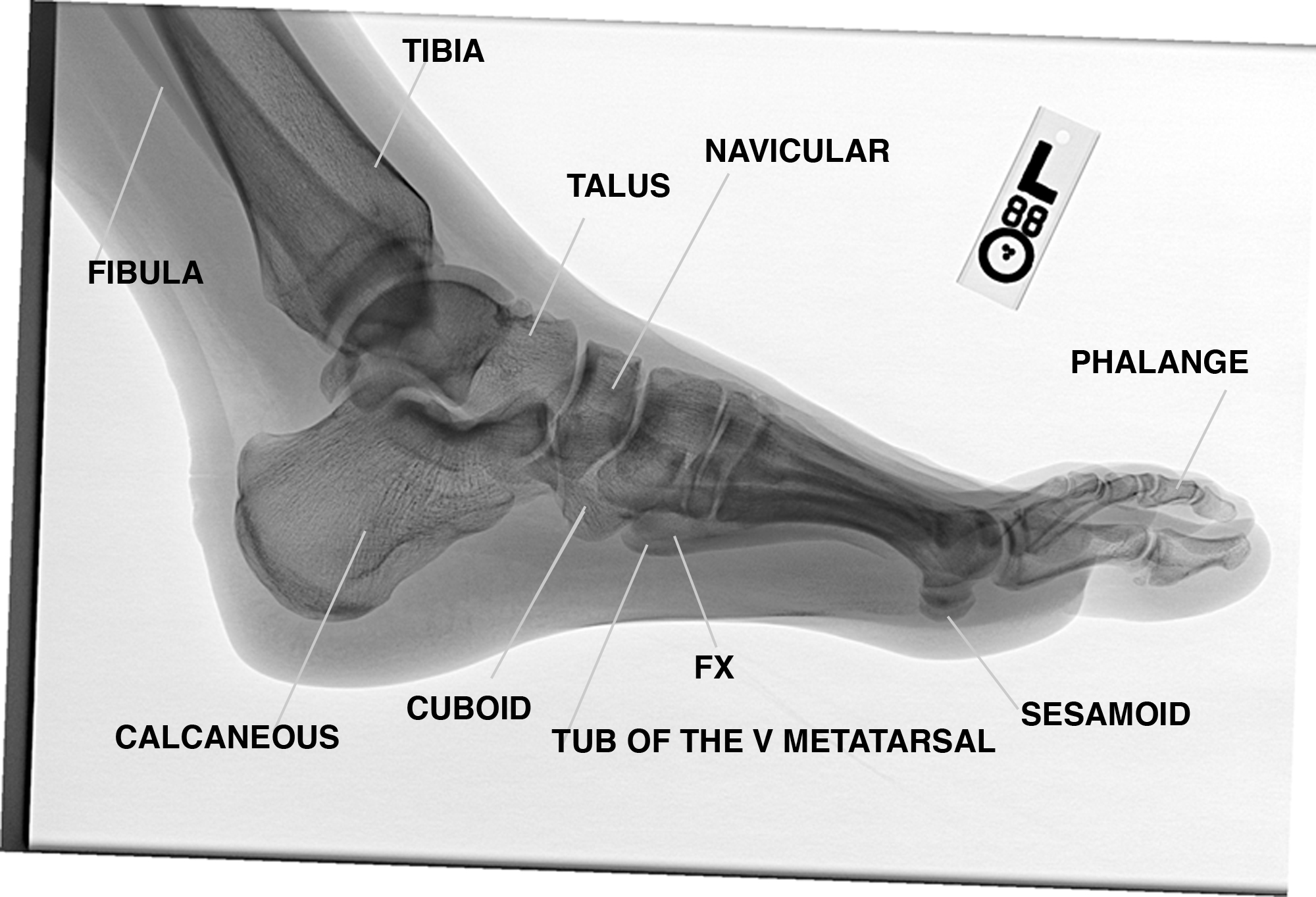 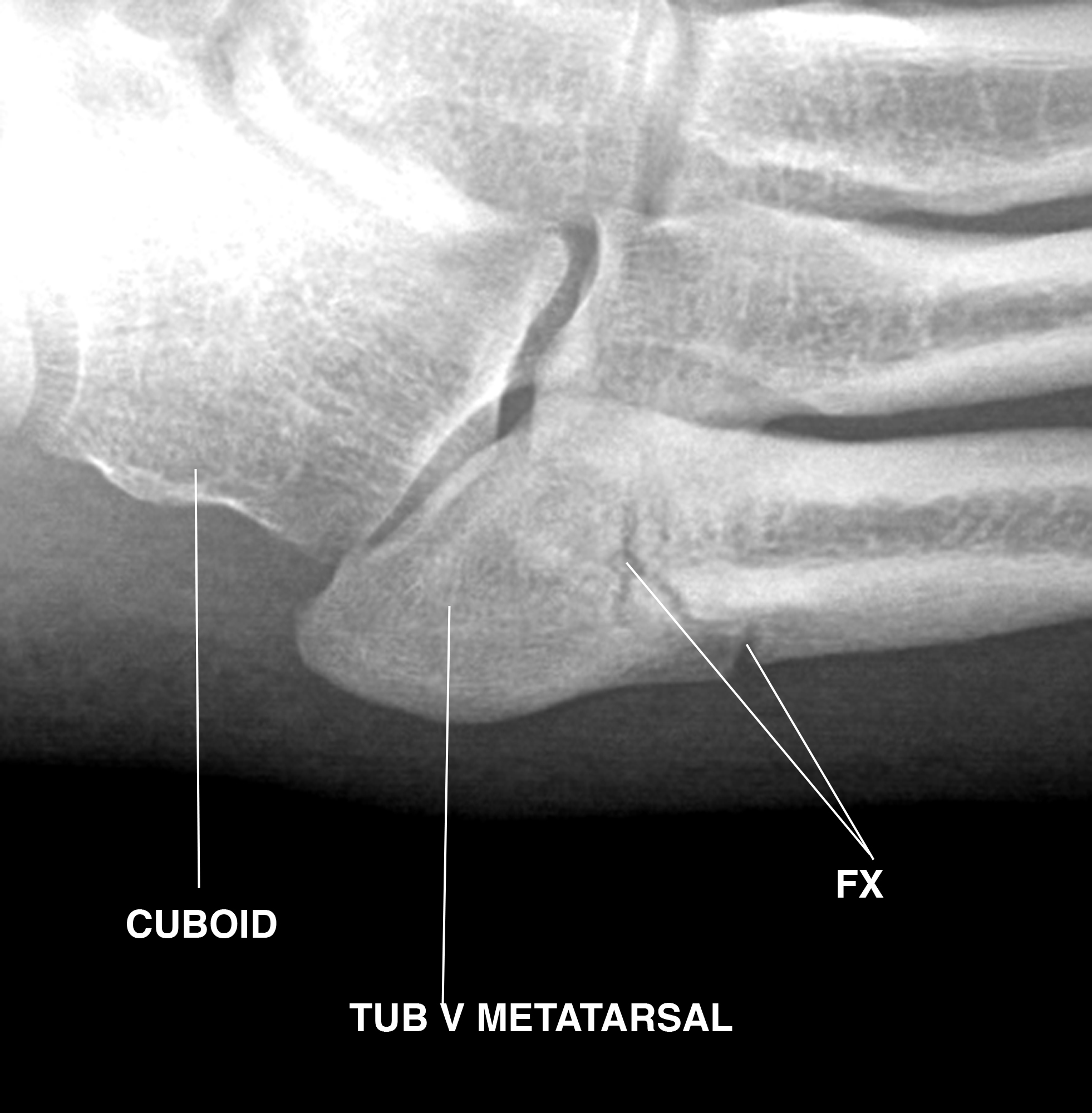 FIGURE 3 is the cone down oblique radiograph of the fracture site displaying disruption
Of the trabeculae by the fracture (FX). 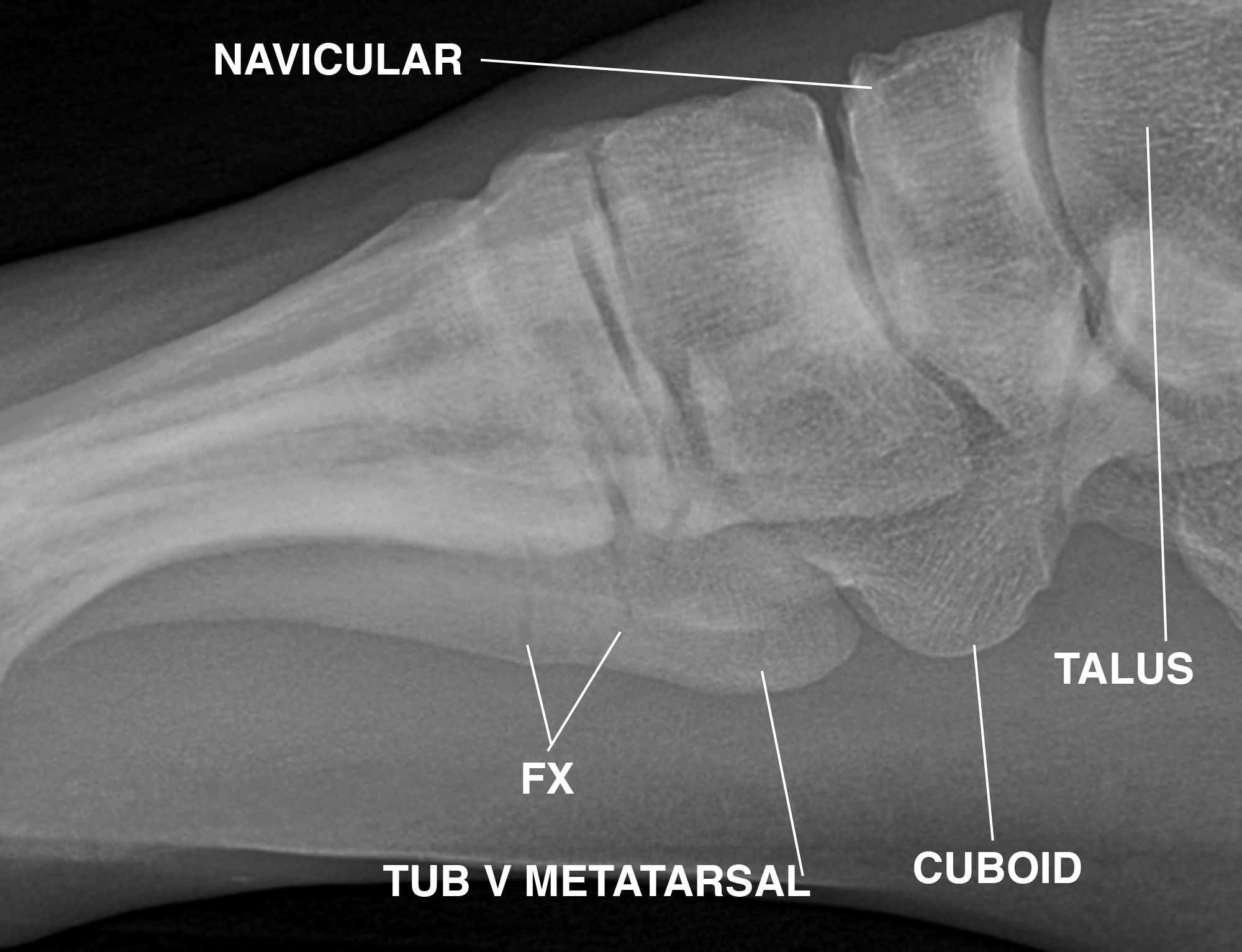 FIGURE 4 is the left lateral enlarged non-weight bearing image of FIGURE ONE.

The metatarsal bones are divided into three parts; a base, body and head. The base is the part closest to the ankle and the head is closest to the toes. The narrowed part in the middle is referred to as the body, or shaft, of the bone. The bone has two flattened surfaces; the plantar and the dorsal surface. The surfaces are roughened for ligamentous attachments. The bone is curved in length, concave inferiorly, and slightly convex superiorly (2).

The bases are smooth and articulate proximally, with the three cuneiform bones and the cuboid bone having articular groves for facets on their sides. The fifth metatarsal has a rough eminence, the tuberosity, on the lateral side of its base. The plantar surface of the base is grooved for the tendon of the abductor digiti quinti.
(2)

The base of the metatarsal is often injured as a Jones fracture. When the fracture involves the tuberosity, , it is called a pseudo-Jones fracture. This is a common fracture of the fifth metatarsal.[3]  A Jones fracture occurs slightly distal  in a small area of the fifth metatarsal  that receives  less blood and is therefore more prone to injury. These fractures can be either a stress fracture, a tiny hairline break that occurs over time, or an acute or sudden break as in our athlete.  The Jones fractures are caused by overuse, repetitive stress, or trauma. They are less common and more difficult to treat than avulsion fractures. Because a Jones fracture sometimes does not show up on initial x-rays, additional imaging studies may be needed  (3, 4).

Unlike most metatarsal stress fractures which do not require immobilization or casting, stress fractures of the proximal 5th metatarsal are at increased risk for delayed union and non-union. Rest is crucial and patients should be advised to stay off the injured foot, since walking can cause further damage.  Ice may be applied to reduce swelling and pain, A bag of ice may be applied over a thin towel to the affected area for 20 minutes of each waking hour. Ice should not be directly applied on the suspected fracture site. Crutches should be provided and the importance of strict non-weightbearing should be emphasized to the patient. Orthopedic consultation is indicated.

Stress fractures involving the 5th metatarsal are at high risk for non-union. Unlike other metatarsal stress fractures, these fractures require strict immobilization and orthopedic consultation. Annotated landmark anatomy is important in making an accurate diagnosis. A diagnosis may be made from a single plain X-Ray radiograph. However, osseous and soft tissues are not well displayed on x-rays because 30% of an x-ray beam is absorbed by the tissue with 70% of the x-ray beam responsible for the image displayed. Follow-up radiographs should be obtained to define the healing process.

James D. Collins, MD, is Professor and General Radiologist in the Department of Radiology at the UCLA David Geffen School Medicine. He formerly served as Director of the required medical student training for the department and President of the James T. Case Radiologic Foundation.

Collins has an extensive background of publications, consultations, and editorial positions, including his current post as the Radiology Editor for the Journal of the National Medical Association. He specializes in bilateral 3-dimensional MRI and MRA imaging of the brachial plexus and has been performing those studies since 1985.

You May Also be Interested in
Most Popular
Denise Daley, PhD: Early Asthma Interventions for Infants
Top 10 Painkillers in the US
Certain Fecal Fungal Microbiome Patterns Found in COVID-19 Patients
Screen Time Linked to Inattentiveness, Behavior Problems in Children
The 10 Worst Things Patients Can Say to Physicians