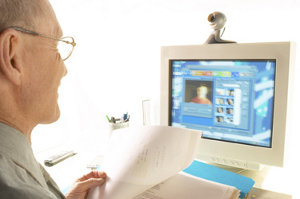 In a recent pilot study, primary care providers (PCPs) who regularly consulted with pain management specialists through telehealth technology wrote fewer prescriptions for the high-dose, short-acting opioid analgesics that are widely associated with greater rates of addiction and overdose.

For their “Impacting Opioid Prescribing Practices of Primary Care Providers Through Innovative Use of Telehealth Technology” research presented at the American Academy of Pain Medicine (AAPM) 2014 Annual Meeting, held March 6-9, 2014, in Phoenix, AZ, investigators from the US Department of Veterans Affairs (VA) and the Case Western Reserve University School of Medicine in Cleveland, OH, connected 9 PCPs stationed across 9 community-based outpatient clinics to the Pain Management Specialist Team at the Cleveland VA Medical Center via weekly 90-minute video-teleconference sessions.

According to the study authors, each teleconference session was comprised of “discussion of the cases the PCPs submitted and a short didactic about a common pain management topic.” From their side of the sessions, the pain specialists “provided recommendations that the PCP could then employ during their next appointment with the patient.”

To gauge the success of the Specialty Care Access Network-Extension for Community Health Care Outcomes (SCAN-ECHO) project, the researchers quantified the number and type of opioids prescribed at each clinic before the telehealth intervention, during the first 6 months of the first year, and during the first 6 months of the post-intervention year. Aside from level of participation, time period significantly affected the PCPs’ prescribing behavior, as the “number of opioid prescriptions per provider decreased significantly across all Cleveland-area clinics after the implementation of the SCAN-ECHO program.”

Turning their focus to drug type, the authors found the participating sites “showed slight increase in prescription rates of long-acting opioids, such as sustained-release morphine and methadone, and declining prescription rates for short-acting opioids, such as codeine, hydrocodone, oxycodone, and immediate-release morphine.” Additionally, “the majority of short-acting opioid prescriptions written at (the clinics) were found to be for low-dose opioids (<30 mg of morphine equivalent), with a small percentage of intermediate- and high-dose opioids” — a trend that held throughout the implementation period.

Thus, the authors concluded the telehealth intervention had an “impact on prescribing practices … seen more in sites where PCPs participated directly, as evident in their use of less short-acting opioids.”

The study was funded by the Veterans Health Administration (VHA) Office of Specialty Care Transformation (OSCT), which originally implemented the SCAN-ECHO program in a mission to “increase the quality of care for veteran patients suffering with chronic conditions in geographical areas with limited specialists’ availability.”