What to Tell the Kids about Caitlyn Jenner: the Transgender Talk

JUNE 03, 2015
Victor M. Fornari, MD
Co-Authored by  Victor Fornari and Ari Lev Fornari
Caitlyn Jenner’s dramatic transformation to the woman she is now is making global headlines and causing Vanity Fair’s website traffic to explode. This could be a teaching moment.

How should we respond to children’s questions about Jenner’s journey as parents, as physicians, as caring adults? In our own family we have some practice with this issue. 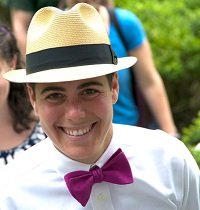 Ari Lev, a transgender man, Victor's son, lives in Boston with his partner Shosh and their child Zeev. Ari Lev (see photo at left) is a rabbi.

His coming out was a process that started in 2000 and in 2005 he began identifying as transgender. He uses male pronouns in referring to himself and asks others to do the same.

To some in his family he is now Uncle Ari, though he prefers gender-neutral titles and also goes by the nickname “Babbo”.  In the interest of privacy he will not disclose his first name before he became Ari Lev.

Coming out as transgender was both terrifying and liberating, but Ari Lev feels more himself every day.

He is learning that the more at ease you are with your own body, the easier it is to connect with others.

Getting back to the question of how to discuss the highly publicized Jenner transformation, we feel the issue is really how to talk to your kids about gender in a way that includes transgender people.

As with any challenging conversation, physicians need to educate themselves so they have the confidence to discuss the matter with ease.

We’d offer two linguistic notes:
“Transgender” is an adjective, not a noun. It describes one aspect of who the person is, but not whole of who they are. Culturally and medically it is important to differentiate between sex and gender, particularly for physicians who are trying to educate parents.

At birth, a child has an assigned sex, male or female. Children then develop gender identity over the course of their lives. Their gender may or may not be congruent with their assigned sex. If their gender is incongruent with their assigned sex, they may identify as transgender or gender non-conforming. This may be a fixed or fluid experience which will likely evolve and change over time. (For that reason, physicians may wish to consider asking their patients what pronouns they wish to be used in reference to themselves).

We favor a discussion of gender that would go something like this:

"Everybody gets to be their own person. Some people are taller and some are shorter, some like spicy food and some like ice cream. We don't always know why we like or feel certain things.

There are lots of different ways to express how you feel in the world.  We do that with what we wear, the colors we like and our hairstyle."

It’s important to tell children that gender identity is part of how we express who we are. For instance, one might say:

The message should be that when it comes to gender, “you can be whoever you want to be.  You are the person who knows who you are best”.

Ari Lev recommends that parents should take an active role in bringing transgender issues into the conversation. He believes that when someone asks is your child a boy or a girl, it is good to encourage your child to answer for themselves.

But if the child is very young, parents can say “We won’t know until they tell us,” or “We think they are a girl unless they tell us otherwise.”

(Ari Lev prefers that Zeev be called his child, a gender-neutral word, unlike son or daughter).

We both agree that it is good to ask your child to express feelings about their body, and if they know anyone who is transgender. It’s also good to ask how they feel about being a girl or a boy.

Getting back to children’s curiosity about the Jenner transformation, it is important to follow the lead of the question; saying that the details are not clear is okay.

As for whether to answer questions about whether Jenner had surgery or hormone therapy, we both think keeping the discussion abstract is useful. Each child will ask questions based upon their level of interest and knowledge. We would not send them straight to the internet, though of course kids often go there anyway.

You can say the details may become clearer over time, but that for Jenner, as with others, the journey has been personal and that someone may wish to disclose those details or not.

In our own family, we had a conversation which is one Victor now sometimes offers to parents when they are faced with challenges they struggled with.

“It is my privilege to be your parent. I do not know this road map. Please, if I make mistakes, be patient with me. It is my intention for us to learn together and share the journey together. I love you.”

(In photo below from left: Ari Lev, his mother Alice, father Victor, sister Marci, partner Shosh, and in the middle, baby Zeev). 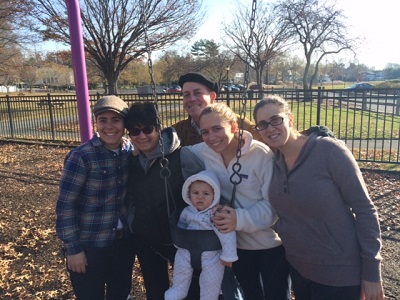 You May Also be Interested in
Most Popular
The Fear of the Coronavirus, and the Reality of the Flu
Gulf War Mystery: Why Is MS Onset Slower in Gulf Vets?
Fluoxetine Reduces Symptoms for Children with Autism Spectrum Disorders
Top 10 Painkillers in the US
Bempedoic Acid and Ezetimibe Combination Approved by FDA for Lowering LDL-C