JUNE 25, 2015
Carolyn Colwell, LCSW-R, MSJ
The King v. Burwell US Supreme Court decision yesterday means that people who could have lost mental health insurance coverage don't have to worry. They'll continue to have the benefits to refill their anti-depressant prescriptions, see a psychiatrist or psychotherapist, or get help from a drug counselor.

"Millions of Americans with serious mental health conditions are going to sleep much better tonight," Joel E. Miller, executive director and CEO of the American Mental Health Counselors Association, said after the decision came down.

A study compiled by his association showed that more than 2.7 million American adults in 34 states with mental health and substance abuse conditions would have become uninsured if the decision had outlawed the federal subsidies that help them obtain insurance under the Affordable Care Act (ACA). 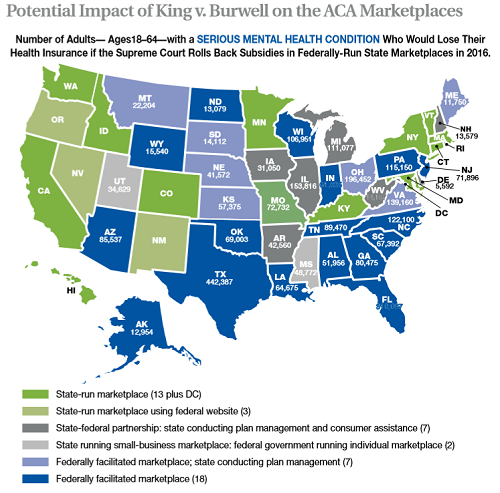 Image courtesy of the American Mental Health Counselors Association.
An interactive version of this map is available here.

The court's validation of the ACA subsidies represents a "giant step forward in building a health care system for the future, a system that must include mental health,"  Mary Giliberti, executive director of the National Alliance on Mental Health (NAMI), added in a statement yesterday.

Although it wasn't part of the Supreme Court case, the ACA mandate on essential benefits also helps strengthen the mental health system, other advocates have noted. ACA insurance and some individual and small group plans must cover mental health treatment. That provision is especially important because many serious mental health conditions are life-long struggles, and are a leading cause of disabilities. Mental, neurological, and substance abuse disorders represent almost 20% of all disabilities in the US, according to National Institute of Mental Health Director Thomas Insel.

When people can't get access to mental health and substance abuse services because they don't have insurance and can't afford it, the personal cost in human suffering is high: divorce, unemployment, and even early death. Major mental illness can decrease life expectancy by 13 to 30 years, according to a 2006 study. A 2011 study found that someone with a previous heart attack who has major depression has 3 times the risk of a cardiac-related death. The National Institute of Mental Health has reported that as many people in the US die annually as a result of suicide as die from breast cancer.

In many communities, local jails have become the treatment centers of last resort for people with serious mental illnesses, such as schizophrenia, bipolar disorder, and major depression. Most of them have been charged with only minor, non-violent crimes, according to the Vera Institute of Justice. It reports that serious mental illness affects 14.5% of women and 31% of women in jails. One solution, Giliberti wrote in a recent blog, is getting "people living with mental illness the right help in their communities before the criminal justice system ever gets involved." She added that putting the mentally ill in jail in Wayne County, MI can cost 3 times as much as treating them in the community.

You May Also be Interested in
Most Popular
The Fear of the Coronavirus, and the Reality of the Flu
Top 10 Painkillers in the US
Father's Depressive Behaviors Negatively Influence Children
When to Suspect Diarrhea is Symptom of a Clostridium Difficile
Bempedoic Acid and Ezetimibe Combination Approved by FDA for Lowering LDL-C