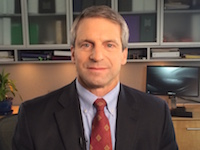 Concerns have been raised regarding the tolerability of the non-dopaminergic atypical antipsychotic agent pimavanserin (Nuplazid) in cognitively impaired patients with psychosis associated with Parkinson’s disease (PD).

Such psychosis is common in PD and increases in frequency and severity with the duration of PD. Dementia develops in as many as 80% of all PD patients, and psychosis is a risk factor for cognitive impairment.

Pimavanserin, a potent, selective inverse agonist/antagonist of the 5HT2a (serotonin) was recently approved in the US for treating hallucinations and delusions associated with PD psychosis. As such, it is the first and only medication approved by the US Food and Drug Administration (FDA) for this indication.

To address these concerns, a team led by Daniel Weintraub, MD, (pictured) a professor in the Department of Psychiatry at the Perelman School of Medicine at the University of Pennsylvania in Philadelphia, re-evaluated data from the pivotal, placebo-controlled Phase 3 North American registration trial (Study 020) for pimavanserin, 34 mg once daily. The medication is taken as two 17-mg tablets without dose titration.

Weintraub, who is also affiliated with the Parkinson’s Disease and Mental Illness Research, Education and Clinical Centers at the Corporal Michael J. Crescenz Department of Veterans Affairs Medical Center in Philadelphia, presented the results of the study during a poster session at the 21st International Congress of Parkinson’s Disease and Movement Disorders in Vancouver, British Columbia, Canada, on Monday, June 5, 2017.

Weintraub’s collaborators on the study included colleagues from the drug’s sponsor, ACADIA Pharmaceuticals in San Diego, California, and the University of Exeter Medical School in Exeter, UK.

Except for cognitive status, patient characteristics in each group were similar. The investigators then compared the two sub-groups in terms of efficacy and safety/tolerability results.

The team found that the efficacy, safety, and tolerability of pimavanserin were similar in both groups, Weintraub said. Moreover, results of the analysis indicated that pimavanserin was actually better at decreasing the mean score for delusions in the cognitively impaired group than in the normal group. To assess these symptoms of psychosis, the study used the a PD-adapted version of the Scale for the Assessment of Positive Symptoms (SAPS), a nine-item instrument for rating delusions in which each item is rated on a scale from 0 to 5.

As a result of their findings, the investigators concluded that pimavanserin reduced symptoms of psychosis in cognitively impaired patients at least as much as it did in cognitively intact patients.

However, to replicate and extend these findings, the team plans to conduct additional studies of pimavanserin in PD psychosis patients with a broader range of cognitive abilities and formal cognitive diagnoses, including mild cognitive impairment and dementia.

Moreover, Weintraub noted, studies of pimavanserin in other neurodegenerative diseases characterized by psychosis and dementia are needed to determine the efficacy and safety of this novel antipsychotic in conditions other than PD.

You May Also be Interested in
Most Popular
Parental Therapy Helps Children with Anxiety
COVID-19 Affects Mental Health of Nurses, Frontline Workers More Than Others
Comparing RT-PCR and Chest CT for Diagnosing COVID-19
Limited Supply of Chloroquine, Hydroxychloroquine Could Affect COVID-19 Use
Flu Cases Near 30 Million in the US, CDC Reports