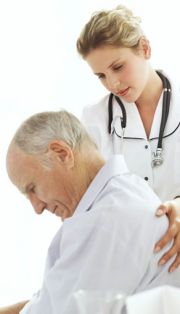 Nursing home admission rates and care costs for Parkinson’s disease (PD) patients could be better managed by a multidisciplinary rehabilitation program developed in the Netherlands.

A study of the program was released Tuesday, June 6 at the 21st International Congress of Parkinson’s Disease and Movement Disorders in Vancouver, BC.

The Rehabilitation Unit of the Parkinson’s Expertise Center (RU-PEC) in Groningen, Netherlands began the multidisciplinary program, which included a patient-customized program and optimization of medication therapy for 24 advanced PD patients.

The progression of PD generally results in the loss of physical and cognitive abilities, which in turn disrupts patients’ daily living and ability to live independently. The study focused on an older group of PD patients, with a median age of 71 years.

Researchers used metrics of the Academic Medical Center (AMC) Linear Disability Scale (ALDS) and the ability to live independently at home after participation to evaluate patients’ physical disability and activities of daily living (ADL), respectively. Patient assessments were performed at baseline, 6 weeks, 3 months, 2 and 5 years after inclusion in the program.

The optimized program returned positive results. A total of 83% of patients were able to return home after participation in the program. At year 2, 65% remained living independently at home, and 28% remained at home after 5 years.

Another 78% of patients improved in their ALDS score, with an average of 9.9 points scored on the scientific-based questionnaire on disability. Overall patients’ quality of life, nursing home admission delay, and treatment costs improved under the program.

Janis Miyasaki, Director of the Movement Disorders Program at the University of Alberta, advocated for more homecare-based treatment of PD, and the avoidance of skilled nursing home facilities “if at all possible.”

“There is no question that given proper supports and a strong family structure, activation and physical activity provided by a family are generally superior to what is provided in very stretched and strained nursing facilities,” Miyasaki said. “Further, staying at home often fulfills the patients' and families' wishes to stay at home.”

You May Also be Interested in
Most Popular
Limited Supply of Chloroquine, Hydroxychloroquine Could Affect COVID-19 Use
Flu Cases Near 30 Million in the US, CDC Reports
Comparing RT-PCR and Chest CT for Diagnosing COVID-19
Concern Over Sleep Apnea and Coronavirus Transmission
Gastrointestinal Issues Could Help Diagnose Coronavirus