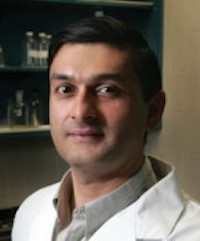 In reviewing the medical treatment of dystonia, Mandar Jog (pictured), MD, addressed the treatment of specific dystonias during the 21st International Congress of Parkinson’s Disease and Movement Disorders in Vancouver, British Columbia, Canada, on Sunday, June 4, 2017.

Jog, a professor in the Department of Clinical Neurological Sciences, Neuroscience, Physiology and Pharmacology, Neurology in the Schulich School of Medicine & Dentistry at the University of Western Ontario, also described the kinematically driven treatment and physical interventions being developed by his group.

Dystonias with specific causes require specific treatments, Jog said. However, in most cases, the treatment of dystonias is largely symptomatic. Many different drugs have been use for dystonia, Jog explained.

Although baclofen is one of them, Jog noted that all of the data on baclofen comes from open-label studies, and baclofen withdrawal may cause an acute dystonic crisis. And although many dystonia patients respond to a very low dose of levodopa, Jog said he does not use this strategy.

Benzodiazepines have no role in focal dystonia but provide some benefit in tardive dystonia, Jog said, adding that clozapine is the only receptor blocker beneficial for secondary tardive dystonia.
Another option for dystonia is tetrabenazine. However, Jog recommends avoiding it in depressed or suicidal patients because the drug may worsen these problems.

In addition, deutetrabenazine, a modification of tetrabenazine with a longer half-life, may also be used.

Although physical therapy is often used, little research has been done to evaluate its effectiveness. Therefore, Jog does not regularly refer his patients for physical therapy. Instead, custom-designed braces may be used to help mimic the sensory “tricks” patients often use to control dystonia.

Regarding botulinum neurotoxin (BoNT) injection therapy, Jog noted that 4 agents made by different companies have been approved for use in treating different types of dystonias. BoNT injections work well for oromandibular dystonia, but practitioners must carefully determine whether the dystonia involves jaw opening, jaw closing, or some combination of the two and inject the appropriate muscles.

BoNT is easy to inject into the genioglossus for tongue dystonia and “works quite well, with no dysphagia,” provided the injection goes deep enough laterally, Jog said.

However, treating writer’s cramp with BoNT injections is difficult because the neuromuscular patterns in this dystonia are so complex. EMG guidance is needed to maximize results, but even with it, the technique has “a 50/50 hit rate,” Jog said.

Instead of injections, Jog and his group have been using haptic-based retraining and printing pens.

One such approach uses a kinematic robot that measures the force of the elbow on the desk while the patient is writing and pushes back on the writing hand to provide feedback on the writing pattern. Jog noted haptic feedback could “normalize almost all patients.”

Jog’s group also uses 3D printing to print pens with an actuated motor that provides negative feedback for the patient. In one study of this technique, every patient of 12 was able to write.
Unlike for writer’s cramp, BoNT injection works “reasonably well” for cervical dystonia.

Unanswered questions include starting doses, injection sites, and whether to use multiple or single-point shots. Jog added that, in more complex cases, kinematic evaluation with a wearable sensor system may be used. One such system can quantify clinical patterns in less than a minute and provide information needed to guide which muscles to inject and dosages to use for each patient.

Jog concluded that the next frontier is to use kinematics to determine when to switch between BoNT products.

You May Also be Interested in
Most Popular
The Fear of the Coronavirus, and the Reality of the Flu
Partnering with Patients: Effective, Patient-Centered Care for Chronic Pain
ACR Releases First Guidelines for Reproductive Health in Rheumatic Diseases
Discussing Healthful Eating and Weight with Obese Adolescents
Young Mothers Face More Mental Health Hurdles