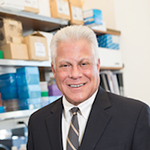 The brain uses a variety of compensatory mechanisms to try to reverse the disordered neurophysiology that leads to movement disorders. David Eidelberg, MD, (pictured) professor of molecular medicine and neurology at Hofstra Northwell School of Medicine in Hempstead, NY, recently gave an in-depth presentation on what imaging studies have revealed about these mechanisms.

His talk was delivered at the 21st International Congress of the Parkinson’s Disease and Movement Disorders in Vancouver, BC.

Eidelberg is also professor and head of the Feinstein Center for Neurosciences at The Feinstein Institute for Medical Research in Manhasset, NY, and a noted expert on the functional imaging of the brain to diagnose neurologic disease and chart its course. During his presentation, he cited the difficulty of distinguishing compensatory mechanisms from underlying pathology. He also touched on how the brain’s efforts to compensate may eventually contribute to its disordered neurophysiology.

He began by describing the “principle components covariance pattern” of brain metabolism in patients with Parkinson’s disease (PD). This pattern, which has been found in many different populations of PD patients worldwide, is known as the PD-related pattern (PDRP) and includes dichotomies in the relative increases or decreases in metabolic activity in various key regions of the brain. In images from brain scans, relative increases in certain areas are shown in red, and relative decreases in other areas are shown in blue. This difference indicates that parts of the network are going up in metabolic activity and others are going down in this activity over time.

He then compared the patterns in scans of a cohort of patients with very early PD that progressed with those from a group with later-stage PD.

“It can be shown analytically that these patterns are Parkinson-wide, that there is a basic linearity that doesn’t change over time,” Eidelberg said. “So it is a linear process. This network itself seems to grow over time. The core of it is the PDRP progression.”

Eidelberg asked what brain region connectivity means in terms of brain structure — the architecture of its network, not anatomy. He explained that analysis of the images was done by computer using a “social network approach” and was therefore independent of brain anatomy.

The network’s red areas that reflect the PDRP itself are in the core parts of the brain such as the basal ganglia, thalamus, and pons, and the blue areas are in the brain’s peripheral cortical regions, Eidelberg explained.

“So we get the sense of a core-periphery architecture,” he said. “Normal people don’t show this. This is only in Parkinson’s disease that you have this abnormal anatomy. And for those who wonder, giving levodopa doesn’t change it. It’s fixed.”

He spent the rest of his talk explaining whether the red areas are working harder to compensate for PD or are part of the disease itself. To do so, he cited a group-wise analysis of 33 patients that was replicated by 3 independent groups. These analyses identified extra connections that seal off “triples” or triangular nodes in brains with PD. These unnatural, sealed triangles create a propensity toward oscillation that can be coherent with other oscillators or not, Eidelberg said.

“The main thing to bear in mind here is that it’s abnormal and perhaps interfering with the formation of new connections, predominantly in red areas,” he said.

Although these findings show that the PDRP neural network is abnormal, Eidelberg said that the abnormality could be compensating for an underlying pathophysiological process and warned that targeting abnormally overactive compensatory zones could be destructive. He added that the abnormal network could also begin as compensatory, then become a source of neurodegeneration in response to a change in the system.

Next, he addressed the “more interesting” area of pre-clinical disease. He began by noting that REM behavior disturbance (RBD) is highly likely to devolve into frank PD and so is hemiparkinsonism. As a result, Eidelberg said, researchers decided to look at neural network patterns in subjects with these two conditions to determine whether these patterns were helping or hurting.

Eidelberg asked what components of the network were promoting neurodegeneration, or were "compensatory and keeping the person pre-clinical?"

"Longitudinal studies have pointed to the pons as being the compensatory area, at least initially,” he answered.

He then addressed what imaging studies have revealed about the pathophysiology of Huntington’s disease (HD), noting it provided imaging researchers a way to study pre-clinical carriers of the HD gene systematically. In some cases of HD, the mutant gene has complete penetrance and therefore yields disease no matter what. So if you have the gene, you are de facto in the pre-clinical stage of the disease, Eidelberg noted.

Eidelberg cited a study that compared 12 pre-clinical carriers of an HD gene with 12 matched controls. In that study, the HD Related Pattern (HDRP) increased in the carriers over time, but this pattern was much higher at baseline in patients who phenoconverted (4/8) during the study period than in those who did not.

Moreover, imaging of the brains of HD gene carriers revealed a diminution in striatal activity accompanied by a “quite salient” increase in thalamic activity. The increase in thalamic metabolism was sustained in those who remained asymptomatic, but those who phenoconverted lost that increase, he said. Furthermore, the baseline thalamic activity of phenoconverters was lower than that of those who remained asymptomatic and eventually reached the lower limits of normal and went beyond that.

“So the rate of progression [to HD] is determined by the thalamus’ ultimate decline,” he said.

In conclusion, Eidelberg said that the red areas seem to have an initial compensatory role in the pons in PD and in the pontothalamic projections in HD. However, a brain region that exerts a compensatory effect can “flip over” and become pathological. Although pons activity probably potentiates dopamine release in the pre-clinical period, he speculated that over time this process might result in progressive pathological increases that continue throughout the course of PD.

However, in HD, the thalamus briefly exerts a compensatory effect then “burns itself out” like a forest fire so that at autopsy, the nuclei are gliotic and scarred, reflecting the reactive response of glial cells to brain injury.