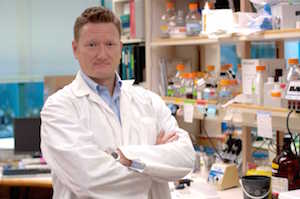 Researchers are making tremendous advances in the development of new approaches to treating Huntington’s disease (HD). One such approach, gene therapy, was the focus of a plenary session presentation given by HD Study Group Co-chair Blair Leavitt (pictured), MDCM, FRCPC, during the recent 21st International Congress of Parkinson’s Disease and Movement Disorders in Vancouver, BC.

In HD, CAG repeat expansion in a mutant gene results in abnormal RNA that produces a toxic protein that leads to neurodegeneration, Leavitt said. Researchers have reasoned that preventing the production of this abnormal protein will block all the downstream pathogenic pathways leading to the disease, and the first clinical trial of this approach to treating HD has now entered the arena.

Researchers are pursuing several strategies for gene silencing, Leavitt, a senior scientist at the Centre for Molecular Medicine and Therapeutics (CMMT) at the Child & Family Research Institute at UBC, said. The strategy Leavitt is using targets RNA with antisense oligonucleotides (ASOs), or artificial DNAs chemically modified to extend their half-life in cells. These DNAs bind to specific RNA sequences, so this approach can target any RNA in the body. Leavitt is using an ASO specific to HD RNA to degrade it, prevent the production of the neurotoxic HD protein, and ameliorate the pathogenic features of HD.

ASOs have several advantages, Leavitt said. They don’t need to be introduced by a viral vector. If given access to the right areas of the brain, they are freely taken up by neurons and glia. Their action is dose-dependent. They are stable and have long-term activity, but it is reversible.

"This adds a lot of benefits as far as safety,” Leavitt said. "They’re very much like our classic small molecules, so we’re comfortable bringing these things into clinical development."

Leavitt noted that researchers already have a lot of clinical experience with ASOs. The first ASO used clinically was approved in 1998 for local treatment of cytomegalovirus retinitis. Moreover, an intrathecally administered ASO (Ionis-SOD1Rx/ Ionis-Biogen) was shown safe for amyotrophic lateral sclerosis, and a second clinical trial of this agent is now underway.

And recently, Leavitt continued, a Phase III trial showed that the intrathecally administered ASO nusinersen (Spinraza/Ionis-Biogen) provided significant benefit in spinal muscular atrophy. As a result, nusinersen became the first agent approved for the treatment of this disease. Leavitt added that nusinersen was so effective that the trial was stopped early.

In a mouse model of HD, 2 weeks of ASO infusion directly into the brain had a prolonged effect in decreasing HD protein and resulted in a sustained decline in HD RNA for up to 3 months. The ASO also had beneficial effects on motor function. For example, ASO treatment resulted in a prolonged improvement in motor coordination and performance on a test that requires running on a rotating rod. Although the performance of the HD mice was worse than that of normal mice, the treated HD mice showed less hypoactivity, anxiety, and loss of brain mass than untreated HD mice.

Leavitt noted that in humans and other primates, ASOs must be delivered by intrathecal injection into the lumbar spine. When given to monkeys, these agents result in very significant and prolonged inhibition of HD protein and RNA levels, decreasing them in important regions of HD pathology such as the cortex by 50% and in deep grey structures by 25% for up to 8 weeks. And the same protocol used in monkeys is now being used in the ongoing human trial, Leavitt explained.

Although animals can have their brain removed and the HD protein in it measured, research in humans requires a surrogate biomarker to measure the engagement of the agent with the target, Leavitt said. Measurement of HD protein levels in CSF can serve as that surrogate and can be done by using antibodies and a laser interrogation chamber, he added.

Using these methods, Leavitt and colleagues were able to show that the mutant HD protein was not detectable in the CSF of controls in 2 cohorts — 1 in London and 1 in Vancouver. However, levels of the toxic protein were elevated in the CSF of subjects in whom HD had not yet manifested, and these levels increased when HD did manifest. Moreover, these levels correlated nicely with disease burden score. As a result, Leavitt and team have included measurement of the HD protein in CSF in their clinical trial.

The first patient in that first-in-human, early-phase safety trial was treated with the HD gene-targeting ASO, Ionis-HTTRx (Ionis-Roche), in Vancouver, in September 2015. The agent, which is delivered by intrathecal injection, targets both the mutant and the normal allele, so it’s not allele-specific. Moreover, it must be injected repeatedly every 4 weeks, Leavitt explained.

The trial (NCT02519036) is currently being conducted at multiple sites in the United Kingdom, Germany, and Canada (Leavitt’s site). In the trial, 48 otherwise healthy, high-functioning HD patients were randomly assigned to receive placebo or ascending doses of Ionis-HTTRx. Three patients have been randomly allocated to receive active treatment for every 1 allocated to receive placebo. So far the study is fully enrolled, and no evidence of significant adverse events or safety concerns has surfaced, Leavitt said.

“So I think we can safely say that this is tolerable,” Leavitt added.

Secondary endpoints of the trial include a number of clinical endpoints as well as a determination of the pharmacokinetics and plasma levels of the agent and whether CSF reveals evidence of a decrease in HD protein after treatment. And because “levels don’t reveal what’s going on deep in brains, but imaging modalities may give us some insight,” magnetic resonance imaging and spectroscopy studies are also being used, Leavitt said.

Results of the trial are expected in 6 to 8 months.

“This is certainly exciting. It’s the first time we’ve been able to bring a genetic therapy into this disorder,” Leavitt concluded.

You May Also be Interested in
Most Popular
The Fear of the Coronavirus, and the Reality of the Flu
Top 10 Painkillers in the US
Plastic Surgery Isn't Child's Play for Teens
Benjamin Click, MD: Treating the Gut and the Brain
Helping Youth with Type 1 Diabetes Improve Transition from Pediatric to Adult Care