Why and How Did Zika Turn into Such a Fearsome Virus? 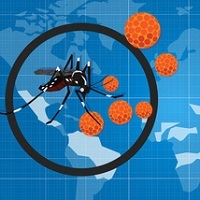 The Zika virus has its mysteries.

So far, Lyle Petersen, MD, of the US Centers for Disease Control and Prevention (CDC), told attendees of IDWeek 2016 in New Orleans, Louisiana, today, the biggest one is why it is causing the severe neurological problems that have made it front page news in the past two years.

“This virus has been in Asia for at least 15 years,” Petersen said, without causing microcephaly or other birth anomalies.

Dengue or other flavivirues may be playing a key role in the change.

Petersen was one of several Zika researchers who spoke today at a Zika symposium at the meeting.

There are now 73 countries known to have Zika. Surveillance in Africa is generally not good enough to get reliable numbers, but the virus was first detected there in 1947 and named for the forest in Uganda where it was found.

It was just another monkey virus, and no one worried too much about it he said.

Was it a new strain with new virulence?

So far the virus isolated in the Americas looks identical to the Asian strain.

Was it something different about the genetic makeup of the people who are now getting it? It’s hard to rule that out.

But one of the most promising areas of research has to do with other flaviviruses that are Zika’s first cousins: Dengue and Chikungunya.

Helen Lazear PhD, of the University of North Carolina School of Medicine’s microbiology and immunology is among those who believe there could be an important clue to the mystery of Zika’s virulence in what happens to people who have had dengue or perhaps other flaviviruses, and then get Zika.

Since dengue is endemic in most of the same areas that are now seeing serious neurological damage associated with Zika, she and colleagues are studying antigenic cross reactivity in Zika and dengue.

“Dengue may open up an extra entryway, leading to more severe disease” as well as allowing Zika to infect neurologic tissues—notably the developing neurons in a fetus and the cells that repair and regenerate damaged neurons in adults.

That could play a role in why Zika is transmitted sexually and congenitally, “something mostly unheard of in other flaviviruses,” she said.

The research is just beginning, she said, but looks promising.