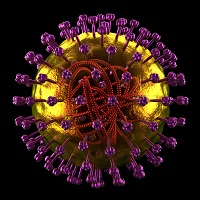 Measles can have a fatal complication: a condition called subacute sclerosing panencephalitis (SSPE). It is a slow but persistent infection caused by a defective measles virus.

Reporting at IDWeek 2016 in New Orleans, LA, Kristen, Wendorf, MD, MS, of the California Department of Public Health, Richmond, CA, and colleagues said deaths from the condition, known as SSPE, is more common than thought. It can occur years after measles infection, even in adults.

The team reviewed cases in California from 1998 to 2015 to understand risk factors.

They searched death certificates and looked at SSPE cases in which the patient had either measles IgG antibodies in the cerebrospinal fluid, characteristic pattern on electroencephalography, typical histologic findings in brain biopsy, or medical record documentation of SSPE-related complications.

As a result, they found 17 deaths from SSPE, with males outnumbering females 2.4 times to one. Twelve (71%) of cases involved a febrile rash illness compatible with measles; all 12 had illness prior to 15 months of age and prior to measles vaccination.

Eight (67%) of the children were living in the US when they had measles. SSPE was diagnosed at a median age of 12 years, with a median latency period of 9.5 years. One case was in a 35-year-old patient.

Many of the patients had long-standing cognitive or motor problems before they were diagnosed.

Their conclusion was that “SSPE cases in California occurred at a much higher rate than previously published among unvaccinated children who were infected with measles in infancy.”

Children too young to be vaccinated should not travel to measles endemic areas, or they should get vaccinated younger than the current recommendation of 12 to 15 months.

“SSPE demonstrates the high human cost of ‘natural’ measles immunity,” they wrote in an abstract due to be presented orally on October 28.

Commenting on the study in a news release, James Cherry, MD, MSc, a study author and pediatrics and infectious disease expert at the David Geffen School of Medicine at UCLA, said,

“This is really alarming and shows that vaccination truly is life saving,” adding that “measles is a disease that could be eliminated worldwide, but that means vaccinating at least 95% of all who are eligible with two doses of measles vaccine in order to protect everyone, including those who aren’t old enough to get the vaccine.”

You May Also be Interested in
Most Popular
Top 10 Painkillers in the US
Probiotics May Reduce Blood Pressure Moderately
Ixekizumab Improves Signs and Symptoms of Psoriatic Arthritis
The Oil and Gas Formula:
Secukinumab Reduces Spinal Pain for Axial Spondyloarthritis