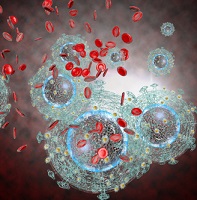 Can a the first of a new class of antiretroviral drugs snatch desperate multi-drug resistant HIV patients from the bring of death?

Researcher at IDWeek 2016 in New Orleans, LA, say a new monoclonal antibody, ibalizumab, can do just that.

Multi-drug resistant HIV infection is a constant challenge for clinicians.

The biologic drug is in a phase 3 trial, and consists of a genetically engineered molecule  that coats immune system cells to protect them from HIV entry.

According to lead study author, Jacob Lalezari, MD, medical director of Quest Research a division of eStudySite, San Francisco, CA, the product could be the first long-acting antiretroviral treatment, as well as the first biologic medication for HIV.

Fully 83% of patients treated showed a benefit from ibalizumab (TaiMed Biologics), with more than half achieving significant reductions in viremia.

The drug does not kill the virus but binds to the host's CD4 cells so the virus can't engage, he explained. It's an entry inhibitor. There are entry inhibitors out there, and researchers may now work on combining them as a single therapy, Lalezari said..

The medication is meant to be taken every two weeks.

Of 1.2 million people in the US who have HIV, about 10,000 have MDR HIV and have few any treatment options.

The drug could ultimately be used for tens of thousands more as patients who are not currently resistant, but become resistant in the future..

Discussing the findings this morning, Lalezari said the patients who took it were desperately ill.

"Some had T-cell counts under 10," he said, which is near death.

"It's not the most potent drug, and not for a huge population," he said, but for those who have no other options it is a life-saver.

"These patients were getting ready to die, and now they are living," he said.
.
“This is the first drug in a long time for patients with multidrug resistance, Lalezari said in a news release, “This therapy showed good activity in patients who were resistant to everything else, which is very exciting for these vulnerable patients and those who care for them.”

The study included 40 patients with MDR HIV who had been infected with HIV for an average of 21 years and had received many medications.

Of these patients, 28% had received 10 or more HIV medications.

It took seven days of treatment for most patients to see a benefit.

The average decrease in viral load at that point was 1.1 log 10. Lalezari said that was a significant drop. Patients' viral loads can fluctuate by a half log due to getting the flu or other events, but a one log shift "concvinced everyone this was not an artifact," he said.

During a control period at the beginning of the study, before getting ibalizumab, onely one patients had achieved such a decrease on existing antiretroviral therapy.

Though the drug is not meant as a paradigm shift in HIV care, it could open the door to new strategies.