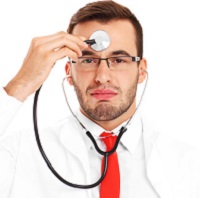 Physicians are notoriously prone to continue working while they are ill—even if what they have is contagious. Researchers at the University of California Irvine, Orange, CA surveyed physicians and medical students to see how extensive the phenomenon is at their academic medical center.

The team administered an electronic survey to 784 physicians and medical students and 474 responded. Nearly all (96.4%) said they would work if they had a cold; most (77.6%) said diarrhea would not keep them from working; over half (53.6%) said vomiting would not stop them from coming in and more than a third (36.3%) said even with a confirmed case of influenza they would report to work.

Determination to report to work when sick was highest among emergency medicine and surgical departments.

The reasons they gave were that they felt guilty making colleagues cover for them, they didn’t believe their illness was sufficiently contagious, and that they didn’t feel sick enough to stay home.

What would it take for these ailing physicians and students to stay home? The top responses were that they would do that if a department chief set an action protocol for what to do when ill, if they saw colleagues get sent home for working when they were sick, and if they saw there were no negative repercussions to taking a sick day.


You May Also be Interested in
Most Popular
Long-term Therapy with Norfloxacin Improves Advanced Liver Disease Prognosis
Top 10 Painkillers in the US
Not Just for Baseball Sluggers Anymore: HGH and Steroids Show Promise for Back Pain
STD Treatment Often Falls in Dermatologists' Hands
Hidradenitis Suppurativa Risk Factors