Software Picks up Hospital-Associated Infections Faster than People Do 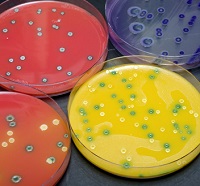 Hospital-associated infections can be better identified and contained through technology, a multi-institutional team reports. In an abstract presented today at IDWeek in San Diego, CA, Meghan Baker MD, ScD and colleagues at Harvard Medical School and other institutions reported on their efforts.

They then identified clusters of cultures yielding pathogenic species where clusters were defined by antimicrobial resistance profiles, locations, and specialty services.  The data were compared to a “convenience sample” of hospitals that had identified such clusters without using the software.

Then they had specialists charged with preventing such infections at their own hospitals review the findings. The special rated the value of the information gleaned by both methods.

The number of clusters ranged from 0-4 per 100 beds per year. The organisms responsible for more than half of the clusters (135) were not under routine surveillance. Ten hospitals provided data on known organisms. The algorithm used to identify outbreaks found 69 clusters than the hospitals were not aware of. The software also found clusters that the hospital was aware of, but found them days earlier.

The hospitals’ infection prevention personnel said they would have wanted to be informed about 81% of those clusters. The authors said the hospitals would have intervened and possibly curtail these outbreaks had they been informed back when they happened.

“Automated outbreak detection can increase the efficiency and scope of identification of nosocomial clusters, including pathogens not under routine surveillance,” the team concluded.