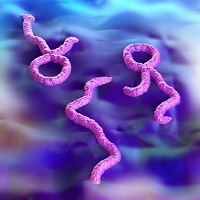 Rhesus monkeys were completely protected from the deadly Ebola virus when treated 3 days after infection with a compound that blocks the virus’s ability to replicate,” said Travis Warren, PhD, a principal investigator at the US Army Medical Research Institute of Infectious Diseases (USAMRIID), during a presentation at IDWeek 2015.

Ebola virus causes severe hemorrhagic fever in humans and non-human primates and was responsible for more than 28,000 confirmed, probable, and suspected cases and 11,000 reported deaths in latest outbreak in West Africa. The high case-fatality rate observed is due, in part, to the lack of effective antiviral therapies with activity against filoviruses.

This work is part of a continuing collaboration between USAMRIID and Gilead Sciences. The Centers for Disease Control and Prevention (CDC) also assisted in the initial screen of the Gilead Sciences compound library to identify potentially promising antiviral candidates.

Through this initial screening work, the novel small-molecule antiviral compound GS-5734, which is a prodrug of adenine nucleotide analog, was identified as an inhibitor of pathogenic filoviruses, such as the Ebola virus.

Initially, the in vitro activity of GS-5734 was evaluated in human endothelial cells, liver cells, and macrophages that had been infected with one of two variants of the Ebola virus (Kikwit and Makona variants) or other filoviruses like the Sudan and Marburg viruses. Initial tests of the GS-5734 antiviral molecule were conducted in cell culture studies using multiple strains of the Ebola virus, including the Markona strain that caused the most recent outbreak in West Africa, but also with other hemorrhagic viruses, including the Lassa virus, the Marburg virus, and Middle East Respiratory Syndrome (MERS) virus.

Next, the efficacy of GS-5734 was assessed in blinded, placebo-controlled studies using rhesus monkeys that had been infected with the Ebola virus. Each monkey was treated once-daily for 12 days with intramuscular GS-5734 (3 mg/kg), once systemic viremia was detected approximately 2 to 4 days after initial infection, or with intravenous GS-5734 (10 mg/kg) on Day 3. Survival at 28 days, plasma viral RNA levels, and signs of Ebola virus disease were monitored.

Intramuscular GS-5734 resulted in 50% survival compared with 0% survival in placebo-treated animals. Intravenous GS-5734 resulted in 100% survival and a sustained 5-log10 copies/mL reduction in mean plasma viral RNA compared with placebo-treated animals. By blocking the viral RNA replication process, the body’s immune system can begin to attack the infection. Furthermore, the signs of Ebola virus disease, including thrombocytopenia, coagulopathy, and serum chemistry changes, were profoundly suppressed in animals who received GS-5734.

“GS-5734 represents the first small-molecule antiviral agent that demonstrates robust therapeutic efficacy in a monkey model of EVD,” said Warren. Given its potential for broad-spectrum anti-filovirus activity, further development of GS-5734 is warranted to potentially treat not only Ebola virus but also other hemorrhagic filoviruses.

Gilead Sciences is currently studying the compound in Phase 1 clinical trials in healthy human volunteers to determine its safety and pharmacokinetic profile.

You May Also be Interested in
Most Popular
Long-term Therapy with Norfloxacin Improves Advanced Liver Disease Prognosis
Top 10 Painkillers in the US
Ebola: Virus "Easily Inhaled"?
5 Employee Problems and How to Solve Them
Women's Blood Vessels Age Faster