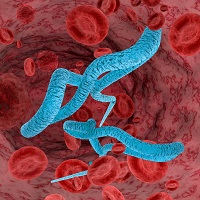 Typically, conventional tests designed to detect the Ebola virus disease (EVD) have relied on complex, multi-step reverse-transcriptase polymerase chain reaction (RT-PCR) assays. The goal is to create an accurate RT-PCR test that quickly provides an answer that is easy to use and that may increase access to testing. The standard RT-PCR assay, called the Trombley assay, extracts viral RNa from samples and detects the nucleoprotein (NP) gene found in the Zaire ebolavirus, but the Cepheid GeneXpert ebola assay is designed to detect both the NP gene and the glycoprotein (GP) gene. No operator interpretation is required using the Xpert assay, as a cycle threshold value of 40 or less indicates a positive result.

At a field biocontainment laboratory in Port Loko, Sierra Leone, a total of 218 whole blood specimens obtained during clinical venipuncture and 71 buccal swab specimens were tested in parallel for the ebola virus using both the standard Trombley RT-PCR assay and using the Xpert ebola assay. All of the whole-blood samples were fresh, but about 60% of the buccal swab specimens had been previously frozen. All samples came from patients who were already known to have the ebola virus. Tests were repeated on about 38% of the tests conducted on Xpert in an effort to determine whether the whole-blood sampling method, using a pipette or a swab, affected the test results. In total, 3.2% of whole-blood and 9.9% of buccal swab samples yielded invalid results using the Xpert assay and were excluded.

Using whole-blood samples, the sensitivity between the two assays was 100%, and the specificity was 95.8%. As 7 of the 8 Trombley-negative, Xpert-positive whole-blood samples were later confirmed to be follow-up submission for previously Trombley-positive patients who had ebola, the specificity of the Xpert assay was revised upward to 99.5%. The whole-blood sampling method used—whether using pipette or swab—made little difference, as nearly all (78/79, 98.7%) tests were concordant, regardless of sampling method used. Using buccal swab samples of Trombley-positive samples, both the sensitivity and specificity of the Xpert assay was 100%.

While the Xpert ebola assay performed well, was easier to use than conventional RT-PCR, and provided results more quickly (2.5 hours compared with 4 hours), its components require storage at cool temperatures between 2ºC and 28ºC, and the test requires an uninterrupted power supply and experienced operators. Additionally, there is some concern as to whether the sample reagents fully deactivate the virus to prevent contamination and transmission.

“The Xpert Ebola test had excellent performance on whole blood and buccal swab samples in a field laboratory setting as compared to an established RT-PCR benchmark,” said Pollock. She recommended that future studies be conducted to evaluate the feasibility and performance of the Xpert Ebola test outside of the biocontainment laboratory setting to further expand patient access to testing.