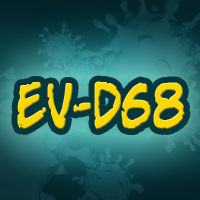 Enterovirus D68 (EVD68) filled emergency rooms all over the US in the late summer and early fall of 2014, sickening hundreds and later blamed for five deaths. In a symposium today at ID Week 2015, clinicians and researchers assessed the outbreak, offering lessons learned and mysteries remaining.
Among those unanswered questions: why did the virus appear to be associated with some cases of polio-like paralysis? Why did so many people escape getting the virus? Will EV-D68 be back this year?
For Steve Oberste, PhD, of the polio lab branch at the Centers for Disease Control and Prevention (CDC) a major task was testing all the respiratory samples sent to the CDC.  EV-D68 was confirmed in 1,153 cases and in 92% it was the same strain. That included 288 diagnoses made in a few states that have the necessary equipment to test for the virus.
“All states but Alaska had outbreaks, but Alaska saw EV-D68 in 2013,” Oberste said.
One puzzling finding, he said, was that the CDC analyzed representative US specimens it had on hand from other research done in 2012 to 2013 to try to learn whether people generally had antibodies to the virus. They found that EV-D68 was nothing new. Further, testing those samples revealed that 100 % of the people from whom they were taken from showed immunity to EV-D68.
Virtually everyone in the US should be able to  be exposed to the virus without consequences.
“Almost everyone was immune, so the question is why people were getting infected,” he said. None of the panelists could answer that question definitively.
“It could be that they got a heavy dose,” said Jason Newland, MD, an infectious disease specialist at Children’s Mercy Hospital in Kansas City, KS. Perhaps the patients “Were near someone who was really coughing and hacking.” Or, he said in an interview after his presentation, perhaps there are genetic differences in individuals that put them at higher risk of getting sick with EV-D68.
The doctors agreed that most of the seriously ill patients, nearly all of them children (though the upper age was 92 years) had a prior history of asthma or reactive airway disease.
The virus poses diagnostic challenges, they agreed. Nearly half the confirmed cases were in patients without a fever. That could mean that an infection could be misdiagnosed as an asthma attack, said Newland, and also result in more people being exposed to the virus.
Since the disease is not reportable, Oberste said, “we did passive surveillance” meaning that the actual scope of the outbreak is unknown.
The CDC’s Susan Gerber, MD, said EV-D68 was first identified in the US in 1962. Of the cases in a CDC study, a cohort of 614 EV-D68 patients in 41 state who became ill in 2014, 59% had been admitted to ICUs and 28% needed to be on ventilators.
It is uncertain whether the deaths of 5 patients could be blamed solely on the virus.
“Was EV-D68 responsible? It is unclear,” she said. Some patients may have had underlying illness or other co-morbidities.
Another new finding is that while the traditional season for respiratory illness outbreaks is winter, “We may need to recognize that there is also a later-summer/fall seasonal outbreak as well.”
The CDC’s Oberste said among his goals is predicting whether EV-D68 will return to the US, and if so, when.
With hospitals and hi-tech labs overwhelming by EV-D68 testing and treatment last year, some changes are already in the works.
The CDC expects to soon have an assay available that can be used by hospitals and other local labs.
Researchers have done studies giving clinicians better information on what therapeutics work. Basically, that is supportive care, but some antivirals appear effective and, curiously, the virus seems vulnerable to treatment with Prozac, “though a therapeutic dose of Prozac in humans does not seem possible,” Oberste said.
Protease inhibitors seem to work.
Newland said that in his hospital, one of the first to diagnose the organism, the main challenge is scaling up to take care of all the patients.
Emergency department visits went from an average 400 to 500 visits a day to 650 to 700 he said.
“We had no more beds, we did not have enough respiratory therapists, and we almost ran out of tubing” for the respiratory equipment.
“Staffing up a hospital in August is not easy,” Newland said.
Through an intense effort, all 45 EV D68 intensive care patients recovered.
The usual trajectory of the illness is that patients get very sick at first, stay that way for a few days, then, with good supportive care, begin to recover.
The doctors agreed that the cases of polio-like paralysis that appeared to sometimes follow infection were deeply puzzling. Newland said his hospital had three such cases of EV-D68 patientswho were cured of their respiratory symptoms but returned weeks later with some degree of limb paralysis. It took one 13-year-old nearly a year to fully recover, he said.
As for the question of whether EV-D68 will return, they agreed that it looks unlikely this year, since it is already October and so far only two cases have been reported, an anecdotal report fro a single hospital, Oberste said.
It will likely be back, but it could take years, even decades.
Enteroviruses are funny that way, he said.