Emerging Diseases: Tapeworm Brain Cysts on Rise in US 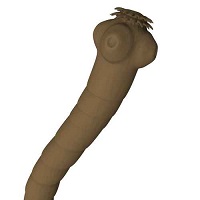 Neurologists seeing patients with seizures who are from developing countries in Latin America, sub-Saharan Africa and other countries with much poverty and poor sanitation should be on the lookout for neurocysticercosis, a condition related to exposure to tapeworms.
“It is everywhere where pigs are able to eat human feces,” said Clinton White, MD, an infectious disease expert at University of Texas Medical Branch in Galveston, TX. The US Centers for Disease Control and Prevention sounded an alarm about the disease in May.
Speaking at ID Week 2015 in San Diego Oct. 9 on emerging tropical diseases, White offered new information on how to diagnose the disease and treat the condition, which is caused by cysts in the brain caused by tapeworm eggs.
In undeveloped countries “It causes 30% of seizures, globally,” White said. And with immigration, it is being seen increasingly in the US. Most of the cases have been in the Southwest, California, and New York City.
“There were 2,000 cases in the US last year,” he said, at a cost of $100 million a year, or about $40,000 per patient, most of whom are undocumented and uninsured.
Clinicians face many problems in treating the disease, he said.
ELISA tests are not sensitive or specific when it comes to detecting neurocysticercosis. Testing for tapeworms is useless because they are gone by the time the damage is done. Neuroimaging is the best way to diagnose it. And above all, there is no point to prescribing anti-parasitic drugs immediately. On the contrary, he said, “If you do that you likely will kill these patients.”
Cysts can be in the brain, in the eye, or even throughout the brain.
“It’s much more important to treat the symptoms than the pathogens,” he said. Treatments include anti-epileptics, corticosteroids, and albendazole plus praziquantel in cases where there are 2 or more cystic lesions.
Eye cysts require surgical removal.
When there are ventricular cysts in the brain, surgery is also the best option, he said.
If the cyst has not adhered to other tissues, neuroendoscopic removal can be highly successful.
“The patient can walk home cured the next day,” White said.
He agreed with one audience member who noted that treatment can be expensive. In some countries, patients with hydrocephaly just get drainage shunts, the cysts are left in place.
But White favors curative treatment. He cited a study of how patients treated that way fared.
“In that study there was 70% eight-year mortality for these patients,” he said, compared to a study in Houston where patients were treated aggressively.  “In Houston, it was zero mortality,” he said.