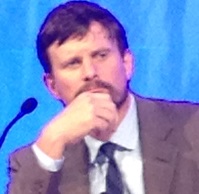 Ian Crozier, MD, has two blue eyes again, one sign that the Ebola infection that nearly took his life is all but gone. But Crozier (seen in photo), an infectious disease specialist who as a doctor for the World Health Organization became a patient in his own emergency treatment unit in Sierra Leone, says he is still feeling the effects of the illness. Months after he and his doctors thought he was cleared of the virus, his left eye changed from blue to green as a result of the infection. The condition is called heterochromia. It is also seen in Marburg virus infections, he said..

His case made headlines and has been written up in several medical journals. His firsthand account of the ordeal today at a plenary session at IDWeek 2015 in San Diego filled an auditorium and drew a standing ovation.

Crozier’s message, he said in an interview later, is that  “Ebola just keeps on giving,” leaving those who recover with life-altering symptoms long after the virus has retreated.

He says he is still easily fatigued, has trouble sleeping, and has problems finding words and with short-term memory. He also has joint pain and severe back pain similar to rheumatology pain.

The constant tiredness has him wondering if his adrenal system has been affected. “Ebola loves the adrenal glands,” he said. Crozier also has decreased hearing and constant tinnitus.

The eye infection was among his most frightening ordeals, he told the crowd. On Christmas Eve in 2014, fully 100 days after his illness appeared to have subsided, a case of uveitis that had left eye red and angry turned out to be the work of the Ebola virus. “It was squatting in my eye; the virus was teeming in my eye,” he said.

Even as his physicians fought the infection—one that he said had turned the eye “soft and doughy”—the scientist/investigator side of him was intrigued with what was happening.

“I want to know how did it hijack that space” Crozier said. Can the virus routinely cross into places where viruses do not usually go, the so-called immune-privileged zones like the reproductive tract, the brain and the eye? In these places antigens do not usually trigger an inflammatory immune response.

Whatever the answers may be to that mystery, in the short-term, “We need diagnostic and treatment protocols for survivors,” he said.

That is only a handful of people in the Western world, but in West Africa, where an estimated 18% of Ebola survivors continue to harbor the virus in the eye, it is a major concern, Crozier said. His own infection improved with intra-ocular steroids and favipiravir. He believes he would have lost his vision in that eye otherwise.

“Going blind in West Africa can be like a second death,” he said, one that leaves victims unable to work and take care of themselves. So far there have been more than 28,000 cases of Ebola and more than 11,000 patients have died. There are new concerns about ongoing infection in survivors.

“We know the virus persists in the eye, in semen, in the brain,” he said. It took 9 months for the virus to disappear from his own semen, he said in the interview. The question is whether it can routinely be cleared in these immune privileged zones. That is a particular concern in places where patients cannot easily be airlifted to high-tech, cutting edge research and treatment facilities as Crozier was.
He knows he got special treatment. He also says he never encounters the stigmatization that his patients and their caregivers often face in West Africa.

You May Also be Interested in
Most Popular
Long-term Therapy with Norfloxacin Improves Advanced Liver Disease Prognosis
Top 10 Painkillers in the US
When to Suspect Diarrhea is Symptom of a Clostridium Difficile
Ebola: Virus "Easily Inhaled"?
FDA Approves Semaglutide Injection for Cardiovascular Risk Reduction