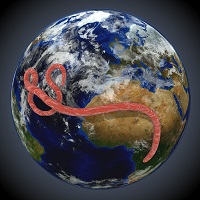 Scripps Research Institute scientists who are genotyping the Ebola virus in patients in West Africa have made an unexpected discovery: among patients found to have both malaria and Ebola, 55% are surviving the deadly Ebola virus compared to 30% who have the virus but do not have malaria.

Kristen Andersen, PhD told of the finding Oct. 7 at a plenary session at IDWeek 2015 in San Diego, CA. "Malaria may prime you to deal better with Ebola," he said.

The finding came about as part of an effort to do gene sequencing on the Ebola virus of every patient, he said. Since the virus mutates slightly every time it enters a new host, Andersen said, genotyping is enabling researchers to trace and track the virus, determining not just which country or town it came from but which individual patient.

For caregivers that may yield information about what the doctor or nurse did with that particular patient to get infected.

"A doctor might remember, 'oh, yes, I wiped my forehead when I took care of that patient','' which can be useful to know," he said.

The testing has also revealed new patterns of infection and timelines for their spread.

Scripps is one of several organizations doing the sequencing, with sequencing equipment in place in Nigeria, Senegal, and Sierra Leone.

"This information will be incredibly important going forward," he said.