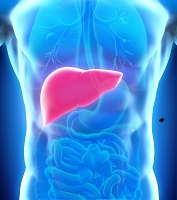 So far there are no approved pharmaceuticals for treating a common liver disease, non-alcoholic steatohepatitis (NASH).

But in a second encouraging drug development reported at the 2015 International Liver Congress in Vienna, Austria, researchers said they like what they see in a trial of Liraglutide (Saxenda/ NovoNordisk).

The other promising pharmaceutical reported at the meeting is Islet Science’s “Remo,” short for remogliflozin etabonate.

The study showed the drug, already approved to treat type 2 diabetes, will likely benefit patients with NASH. The drug is part of a potential class of medications, known as human glucagon-like peptide-1 analogs.

Armstrong said the trial showed liraglutide met the primary endpoint of tissue clearance of NASH, and also reduced the progression of fibrosis. In the trial, overweight patients with biopsy-confirmed NASH were randomized to receive a 48-week treatment with once-daily, subcutaneous injections of either 1.8 mg liraglutide or a placebo. The primary outcome was improvement in liver histology, defined as ‘resolution of definite NASH’ and no worsening in fibrosis from baseline to end-of-treatment.

At the end of the treatment period, 45 of the 52 patients in the study had liver biopsies.

The results showed that 9 of the 23 patients (39%) who got the drug had resolution of NASH and no worsening of fibrosis.  The drug caused marked weight loss, Armstrong said, patients lost an average of 5kg. “As soon as they come off the drug they start to gain weight again,” he said.

There were no drug-related serious adverse events in patients on liraglutide, though some patients had brief spells of nausea or diarrhea.

He characterized the study findings as a “major breakthrough” that points to a potential treatment. The study was a small one and the researchers hope to see a phase 3 trial of the drug.


You May Also be Interested in
Most Popular
Top 10 Podcasts for Primary Care Physicians
Top 10 Painkillers in the US
Medical Marijuana Could Improve Sleep Quality for Chronic Pain Patients
T2D and CV Risk Reduction: Future Management
The Impact of Pollution on The Skin