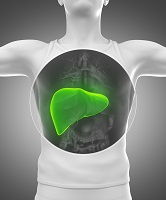 Results of trials of antivirals to treat hepatitis C infections are dominating the proceedings at the 2015 International Liver Congress in Vienna, Austria. In a presentation today, Fred Poordad, MD, clinical professor of medicine at the University of Texas Health Science Center at San Antonio, TX, reported on a trial known as ALLY-1.

The research is a phase 3 clinical trial evaluating a 12-week regimen of daclatasvir (Daklinza/ Bristol-Myers Squibb) and sofosbuvir (Solvaldi/Gilead) given once daily with ribavirin to patients with chronic hepatitis C virus (HCV). The subjects had either advanced cirrhosis or post-liver transplant recurrence of HCV.

“The basic take-home is these patients were safely treated and we had very good outcomes,” Poordad said in an interview.

Eradicating the virus is difficult, even after transplantation. The virus continues to live in the patient’s blood and most patients who get a transplant who were infected before the surgery will develop cirrhosis  within 5 years, Poordad said.

The drug combo holds hope that this cycle could be broken, he said.

There were no drug-drug interactions even though transplant patients were taking immunosuppressive drugs. Poordad said the subjects in the study continued on the same doses of the drug combo even after transplant.

In the study, the company said, there were no serious adverse events due to treatment with the drug regimen.

Nine patients in the cirrhosis cohort relapsed post-treatment, and 1 had detectable HCV RNA at the end of treatment. There were no virologic breakthroughs while patients were getting the drugs.
Three patients infected with HCV genotypes 1a, 1b, and 3 in the post-transplantation cohort relapsed. All 12 patients with relapse are currently being retreated with daclatasvir and sofosbuvir with ribavirin for 24 weeks.

The ALLY-1 study is the third to be reported as part of the Bristol-Myers Squibb ALLY research program. Two others, ALLY-2 and ALLY-3 were presented at the 2015 Conference for Retroviral and Opportunistic Infections and the 2014 American Association for the Study of the Liver’s The Liver Meeting, respectively. Additionally, the European Association for the Study of the Liver included the ALLY regimen in HCV treatment guidelines it issued earlier this week.

The U.S. Food and Drug Administration is currently is reviewing a new drug application for the use of daclatasvir and sofosbuvir to treat patients with HCV genotype 3.

Daclatasvir was approved in Europe in August 2014 for use in combination with other medicinal products across genotypes 1, 2, 3 and 4 for the treatment of HCV infection in adults. Beyond Europe, it is approved in Japan, as well as multiple countries in Latin and South America, the Middle East and Asia Pacific.


You May Also be Interested in
Most Popular
How COVID-19 Affects Children and Pediatric Care
What We Learned About Hepatitis C in 2015
Hep C Drugs: Prices to Plummet, but Not in US
Comparing RT-PCR and Chest CT for Diagnosing COVID-19
Most Read Clinical Headlines in 2013