Mobility Therapy for Certain Patients with MS Gets a Thumbs Down 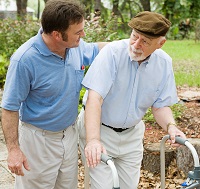 It’s been reiterated time and time again – exercise is essential for overall wellness. Patients with multiple sclerosis can greatly benefit from staying physically active, but in a new study conducted by researchers at the Tactile Communication and Neurorehabilitation Laboratory (TCNL) in Wisconsin, it was found that an exercise regimen combined with Cranial Nerve Non-Invasive Neuromodulation (CN-NINM) does not improve mobility in this population.

CN-NINM works by modulating neural activity within the dorsal pods – an effect that hasn’t been observed with cochlear implants and other devices. In one study, the method significantly improved gait (or walking) in patients with multiple sclerosis.

So up until this point, we know that both CN-NINM and exercise help patients with multiple sclerosis. Therefore, logically thinking, combining the two should help improve mobility in these people, right? Well that’s not true, according to the new research presented at the 2016 Annual Meeting of the Consortium of Multiple Sclerosis Center (CMSC) in National Harbor, Maryland. In the study, researchers at TCNL customized exercises to meet the needs of six individuals with multiple sclerosis. They each had an Expanded Disability Status Scale (EDSS) score of 6.5 (classified as needing constant assistance with cane, crutches or braces) to 7.5 (unable to walk more than a few steps with assistance). Generally speaking, the exercises included:

Morning routine: Evening routine: The participants were tested at baseline and then trained in the lab for two weeks in the lab. They continued with five cycles of four weeks of at-home training – including one week of training back in the lab. All of the participants tolerated the therapy with a greater than 80% compliance rate. After six months total, the patients were retested.

“Despite the rigorous training regimen, fatigue improved or remained unchanged in all subjects,” the authors confirmed.

The best gait improvements, including increased mobility, were observed in those with an EDSS score of 6.5 to 7.0.

“This intervention may not be appropriate for those at EDSS 7.5, at least with module modification,” the team concluded. However, they believe a larger study could help shed more light on the matter.