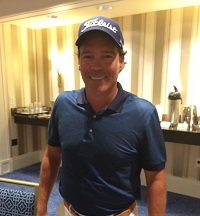 Editor’s Note: Country music artist, Clay Walker, is well-known for his hit songs “She Won’t Be Lonely Long” and “Live Until I Die.” But a lesser-known fact about the star is that 20 years ago he was diagnosed with a relapsing form of multiple sclerosis (MS) at the age of 26. MD Magazine caught up with Walker at the 2016 Annual Meeting of the Consortium of Multiple Sclerosis Center (CMSC) in National Harbor, Maryland.

MD Magazine: What were your symptoms leading up to diagnosis?

CW: Some of the ones that most people have, like my right leg and both my legs kind of went numb, and they just felt like they were asleep. And I was walking down some stairs going to play basketball with the band and I was just kind of laughing and joking around about how my feet felt asleep. And then we got on the court and I lost balance, had double vision, had a facial spasm that lasted about eight weeks, and it was this crazy facial spasm. Then I couldn’t hold a guitar pick in my right hand, so it was an acute attack but, fortunately, I gained everything back except there was a little bit of weakness in my right hip flexor, which this is something that I did not recover from. It’s fine. I ride horses all the time, golf, do other things I want to do, but there’s still a little bit of limitation there but not much.

MD Magazine: And when these symptoms started, was multiple sclerosis even something in your mind or did you have an idea of what it could be?

CW: When I was diagnosed and they told me that I had MS, I confused it with MD immediately. I thought it was muscular dystrophy, and the doctor explained, no, that it was something totally different, that it was multiple sclerosis, that there was no cure for it. At that time, it was 20 years ago, the person who diagnosed me was a neurosurgeon and he did not know that there were medications that you could take either. So I left the hospital with an inconclusive idea about what MS was.

I think the patient/doctor relationship is probably second only to your family because the knowledge you can gain from a really experienced MS specialist is invaluable. It took me a lot of years to actually realize that I could manage MS. I don’t think that people immediately, when they’re diagnosed, like the word “management.” They want to hear the word “cure.” You have to surround yourself, if you really want to do something about it, if you really want to have a successful journey with MS, I believe it’s imperative that you surround yourself with people that have a lot of knowledge about it. I’ve got several relationships that have been helpful to me, obviously my doctor probably the most important. I have a relationship with Teva Neuroscience which has an immense amount of knowledge about MS, and then I have a support group, my family, my wife and kids. And I could say that there are so many pieces that I have to reduce it down to what I call a trifecta – my diet, exercise, medication. That’s really the way that I manage MS. And when you hear the word diet and exercise, that just sounds like any old term.

MD Magazine: Something that everyone should do.

CW: It is for most people who don’t have MS, but if you have MS, you have to give your body and your mind and yourself every possible opportunity to heal and to take care of itself. So those things were real important, and I noticed that when I do have a decent diet and I do exercise, I’m more apt to not want to miss my medication. I want to do it, it’s like okay. At the end of the day, I’m like, phew, man, check all three of these things off. I’m in a great place.

MD Magazine: How has MS affected your career?

CW: I’ve never missed a show, so MS has not affected me in the work space. It’s actually only encouraged me to actually love my job more because when I was originally diagnosed by the neurosurgeon, he told me that I’d be in a wheelchair in four years and dead in eight. So if you would have asked me, Clay, what would you do for 20 years on this earth, I’d say I’ll give you everything I own.

MD Magazine: So what’s your involvement now with raising awareness for MS?

CW: MS, while I think the number of people who have MS is small, it’s still very significant because we don’t know what causes MS and because we don’t know how to cure MS. We also don’t know that if we find a cure for multiple sclerosis, we may find a cure or the basis of a cure for a lot of autoimmune diseases. So I believe that the work that I do with MS is more from the personal side for people who have multiple sclerosis, that have it, that I’m able to say you’re going to be okay. Let me help you if I can if my story helps you. Let me help guide you through this difficult journey, especially if you’re newly diagnosed. I want to be there for everybody but especially newly diagnosed people.

And, on the celebrity side of it, if I can raise more awareness, I hope that that helps bring dollars to MS researchers and encourage them and inspire them. Sometimes if you’re working in a lab all the time, it helps to actually put a name with a face, like give multiple sclerosis a face and I don’t mind that being me anymore. That used to bother me. I used to not want to be like the poster child for MS and now I gladly accept it.


Continue Reading (Page 2) >>
You May Also be Interested in
Most Popular
The Fear of the Coronavirus, and the Reality of the Flu
Top 10 Painkillers in the US
Plastic Surgery Isn't Child's Play for Teens
Benjamin Click, MD: Treating the Gut and the Brain
Helping Youth with Type 1 Diabetes Improve Transition from Pediatric to Adult Care