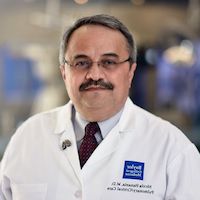 Nicola Hanania, MD, MS
Characterized by continuing exacerbations, severe asthma lays a heavy burden on patients by decreasing their quality of life and ability to breathe easily. To investigate some of the driving factors behind this burdensome disease, Nicola Hanania, MD, MS, Baylor College of Medicine, looked at the Type 2 cytokines in its airway pathology.

Among his findings presented at the 2018 CHEST Annual Meeting in San Antonio, TX, ongoing consequences associated with continuing exacerbations, oral corticosteroid (OCS) use, and poor disease control were found, along with a drive to understand the heterogeneity and complexities of the pathobiology of Type 2 inflammation. IL-13 and the levels of mucus plugging also stood out as primary components to consider.

After first highlighting the goals of asthma management, which include having current control and preventing future risks through a cycle of assessments, treatment adjustments, and response reviews, Hanania moved into studies.

As poor asthma control can lead to increased exacerbations and expensive healthcare that can include hospitalizations, the vicious cycle of continuing exacerbations stood as the most important influence of clinical decision-making among those at the presentation, according to a virtual quiz.

However, Hanania explained that it can be challenging to achieve control in some asthma patients since the disease is heterogenous in nature. Consequently, both allergic and non-allergic triggers can initiate Type 2 inflammatory pathways that can drive pathology in asthma. Specifically, Hanania discussed the overlap between allergic eosinophilic asthma phenotypes in Type 2 high asthma.

Furthermore, IL-13-mediated effects on mucin expression in airway epithelial cells is consistent with the pre-steroid increase in the MUC5AC:MUC5B ratio. Mucostasis is caused by the tethering of MUC5AC-containing domains to epithelium; Hanania pointed this function also likely represents a major cause of mucus plugging in asthma.

The overexpression of IL-13 in mice has also shown to lead to mucous call hyperplasia and mucus production.

In vitro experiments also demonstrate IL-13’s potential roles in airway fibrosis, which may include an induced secretion of pro-fibrotic growth factors and proliferation of airway fibroblasts from patients with asthma as well as stimulation of the human lung fibroblast invasiveness.

Additionally, IL-4 and IL-13 have been found to synergize with FGF2 to increase human bronchial smooth muscle cell proliferation in vitro.