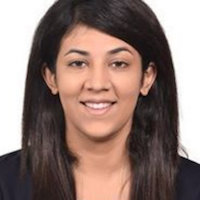 Hira Iftikhar, MD, MBBS
A retrospective analysis has found that the presence of nearly any gram-negative bacteria is likely a risk factor for worse clinical outcomes in patients with interstitial lung diseases (ILD).

In a new study to be presented at the 2018 CHEST Annual Meeting in San Antonio, TX, this week, a team of investigators from Beaumont Health Systems in Michigan reported that patients hospitalized with ILD face worse outcomes in mortality, intensive care unit (ICU) admission, and vasopressor use rates in the event of any gram-negative bacteria infection, excluding Pseudomonas Aeruginosa (PA).

Led by Hira Iftikhar, MD, MBBS, investigators were working with the already evidenced fact that respiratory microbiome alterations are a predisposing factor for ILD. They instead sought to uncover the influence of bacteria’s virulence on such patients’ clinical outcomes, particularly in a hospital setting.

The most common diagnoses among the admitted patients were idiopathic pulmonary fibrosis (40.6%) and Sarcoidosis (27.6%). The plurality of observed respiratory isolates were PA (38.8%), MRSA (26.5%), and other non-PA Gram-negative pathogens (17.6%). Investigators noted that the use of immunosuppressant medications or anti-fibrotics did not influence the development of resistant pathogens.

While the finding that immunosuppressive mediciations or antifibriotics are not as influential in clinical outcomes is crucial, it is overshadowed by the discovery of non-PA Gram-negative pathogens’ burden on ILD patients in a hospital setting. Iftikhar called for follow-up analysis.

“The presence of gram-negative bacteria is a risk factor for adverse events,” Iftikhar said. “This bacteria could lead to a higher mortality rate, ICU admission, and increased vasopressor use. A larger study should be conducted to establish the risk factors for the mortality in hospitalized ILD patients, including the results of respiratory cultures.”

The study, “Role of Respiratory Pathogens in Disease Outcomes in Hospitalized Patients with Interstitial Lung Disease,” will be presented at CHEST 2018.

You May Also be Interested in
Most Popular
Comparing RT-PCR and Chest CT for Diagnosing COVID-19
Hydroxychloroquine Speeds Up COVID-19 Recovery Over Placebo
Flu Cases Near 30 Million in the US, CDC Reports
Limited Supply of Chloroquine, Hydroxychloroquine Could Affect COVID-19 Use
American Thoracic Society Releases Temporary COVID-19 Guidance