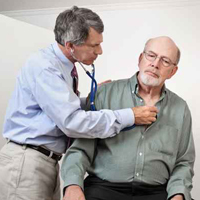 It’s not unheard of for patients waiting to get lung transplants to suffer from psychiatric symptoms. In fact, it’s actually common and the symptoms aren’t limited to those who previously had psychiatric conditions.

Abhay Vakil, MD, and colleagues from the Mayo Clinic in Minnesota, analyzed both emotional and physical depressive symptoms amount pre-lung transplant patients. The study will be presented at a poster session at CHEST 2015 in Montréal, Canada.

Out of 144 patients who received lung transplantation at the Mayo Clinic from 2000 to 2013, 102 of them completed the questionnaire within one year after the procedure. Half of the patient pool was male and the average age was 57. The researchers tracked which patients had depression-related emotional symptoms (DRES), such as anhedonia, difficulty concentrating, irritability, low mood, and suicidal ideation. They also looked at depression-related physical symptoms (DRPS), like pain, sleep disturbances, and change in libido.

A total of 31 patients (30.4%) had history of depression, 25 patients (24.5%) had history of anxiety, and about 4% had history of abuse. However, 42% of the patients included in the study reported emotional symptoms – 16.7% of which were DRES. Symptoms were specified: A total of 53 patients (52%) reported DRPS. The researchers said that this means that physical symptoms could be hard to differentiate from chronic illness. Out of these patients, the following experienced emotional symptoms: Only three of the patients with DRES also had a history of depression and only six had a previous anxiety diagnosis. Therefore, depressive symptoms did not rely on a previous psychiatric diagnosis. This suggests that physicians should target stress and anxiety, as well as DRES, for patients scheduled for lung transplants who demonstrate such symptoms regardless of history.

“These symptoms are common pre-lung transplant and not isolated to patients with pre-existing psychiatric diagnoses,” the authors concluded.