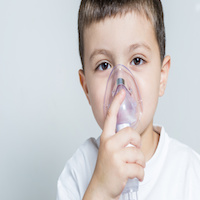 In a presentation delivered at CHEST 2014, Edward Kerwin, MD, discussed the evaluation of the safety and efficacy of the twice-daily COPD treatment of SUN-101, a glycopyrrolate inhalation solution delivered via nebulizer.

As patients grow older, there may be a role for nebulized medicines for COPD patients, rather than traditional dry power inhalers and metered dose inhalers. This particular study looked at a glycopyrrolate administered with an electronic nebulizer, which is a twice-daily treatment.

Kerwin presented the initial format of the eFlow nebulizer system, which unlike traditional nebulizers that use 2 – 2.5 milliliters of solution, uses only approximately 1 milliliter including glycopyrrolate and nebulizes in nearly 2 minutes.

Prior to the administration of the Golden 2 study, the Golden 1 study focused on once daily dosing of nebulized glycopyrrolate. Kerwin remarked,  “Dose ranging with LAMAs is a challenge; it’s challenging for several reasons but even lose doses tend to shoe some benefit. “ He continued, “The goal in dose ranging for LAMAs is really to try to find patients who get at least 100mL in a minimally, clinically reported difference in their trial FEV1.”

Kerwin noted, “We think conventional nebulizers are not really efficient, possibly only 5% of the nebulized dose actually makes it down to the airways. The eFlow nebulizer is perhaps more efficient, but preliminary data suggests about 10% of the dose reaches the airways. So what that means is that we’re using somewhat higher doses with the nebulizer than you would expect if you’re familiar with the dry form of glycopyrrolate. “

For those participants who received LABA or LAMA therapy, it was replaced with albuterol MDI as “rescue therapy” and the study continued to administer both inhaled corticosteroids and roflumilast. The researchers main goal was to observe and assess the change from baseline in the morning trough FEV1 following 28 days of treatment.

This study saw no fatalities. Additionally, reported by 3.2% and 2.8%, respectively, the most common adverse events were COPD exacerbations and headache.

Interestingly, all 4 doses showed significant improvement among participants, in fact, there was a dose response on day one.

“Many LAMA studies end up moving with two doses into phase 3, because it isn’t always possible to be sure which dose will be the best,” said Kerwin.

The study results found twice daily treatment with SUN-101 produced dose-dependent increases in trough FEV1 and FEV1 AUC0-12. While all the doses saw a mean increase above MCID of 100 mL, findings suggest lower doses like the 12.5 mcg bid may have been less beneficial.

He expressed the necessity for additional work to solidify the appropriate dose regimen for SUN-101, but believed nebulized glycopyrrolate through the eFlow could potentially be another treatment option for patients afflicted with moderate to severe COPD.

You May Also be Interested in
Most Popular
Denise Daley, PhD: Early Asthma Interventions for Infants
Visual Impairment, Dementia Are Detrimental to Independence of Older Adults
Flu Cases Near 30 Million in the US, CDC Reports
Screen Time Linked to Inattentiveness, Behavior Problems in Children
Top 10 Painkillers in the US