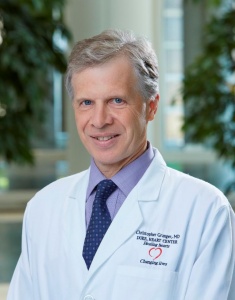 Despite the progress made in the fight against cardiovascular disease in recent decades, stroke and mitigating the risk of such an event still remains a top priority for cardiologists, neurologists, and a multitude of clinicians from other specialties.

With the American Heart Association statistics indicating a stroke occurs in the US every 40 seconds on average and accounting for more than 6 million deaths worldwide in 2017, finding treatment algorithms that can reduce or help prevent risk of stroke can be a matter of life and death for many patients.

While advances in risk prevention have helped mitigate some of that risk, modifiable risk factors can vary wildly from patient to patient and can impact the effectiveness of treatment. A common theme among mostly all cardiovascular conditions, weight is one of the most influential factors in creating an ideal treatment algorithm for patients.

Christopher Granger, MD, professor of medicine and cardiologist at the Duke School of Medicine, is one of the cardiologists seeking to create those algorithms and implement them into clinical practice. In a recent Q&A with HCPLive®, Granger discussed his personal experiences dealing with the nuances associated with primary prevention of stroke in patients who are obese.

HCPLive: What are some of the important nuances for physicians to keep in mind when treating a morbidly obese patient?

The main issue with a very obese person is the volume of distribution is bigger and is it adequate to give 20 mg of rivaroxaban or 5 mg of apixaban or 60 mg once a day of edoxaban or 150 mg of dabigatran—you just don't know. The nice thing in terms of drug effect of warfarin is we measure its effect and adjust the dose appropriately.

So, there has been some concern if you give the same dose to a 60 kg person and a 160 kg person with atrial fibrillation aren't you going to be getting a different degree of anticoagulation—so, that is the concern.

What we know is that up to about 140 kilograms—which is the vast majority of the obese population—for example, the apixaban dose appears to be adequate. In other words, the patient who get that dose compared to warfarin seem to have a comparable degree of stroke protection as the lower body weight population with apixaban compared to warfarin.

So, that’s the kind of thing that we know, but we don't know about say the rare 200 kg patient. At some point it might be worth checking an antichromogenic or anti-Xa assay to make sure there seems to be an appropriate effect.

Another area is a gastric bypass surgery or a short small intestine and does that decrease and should one be concerned. For some of these questions we don't have the answers but we most of the patients seem to be fine on the NOACs.

HCPLive: How much more difficult is creating a treatment algorithm for an obese patient versus a patient with other risk factors?

Granger: I mean, the obese interestingly with chronic disease, obesity is actually a lower risk feature than is being  very thin. Frailty is more associated with a very low body weight than with a very high body weight. So, it’s kind of interesting and almost counterintuitive. Normally, we think of being thin as being healthy, but that’s not true when one has chronic disease and is elderly. So in some ways, one does not need to worry as much about the obese patient as the frail and very low body weight person.

There are issues for obese patients not seen in other groups in regard to treatment. Certainly, sleep apnea is more likely in people who are obese. Lack of physical activity, poor diet, and obesity all increase risk of atherosclerotic heart disease and elevated triglycerides, which we now know from the REDUCE-IT trial that we have a treatment that can help with high triglycerides in atherosclerotic disease events.

You May Also be Interested in
Most Popular
The Fear of the Coronavirus, and the Reality of the Flu
Maternal Vitamin D Deficiency Increases Risk of ADHD in Offspring
Hospitalists Taking Advantage of the iPhone
Tonsil Removal Surgery Could Have Negative Impact on Patient Immune System
Navy Medicine: A Strategic Roadmap for Implementing a Virtual Mental Health Program